Time is zipping by quickly as Boyd and I continue our flight around the perimeter of America. So far we’ve covered thousands of miles in our RV7 and been lucky enough to visit perimeter destinations like Niagara Falls, Cape Cod, Kitty Hawk, the Keys, Cajun country, and Big Bend Texas. Yesterday we managed to find our way to the California coastline, and being so far from home, each “next leg” is a huge adventure.

California has a coastline of 840 miles and we’re anxious to see it all. Yesterday we landed at Santa Paula, KSZP, a few short miles from the Pacific coast. At this point, reaching California seems like a major accomplishment! 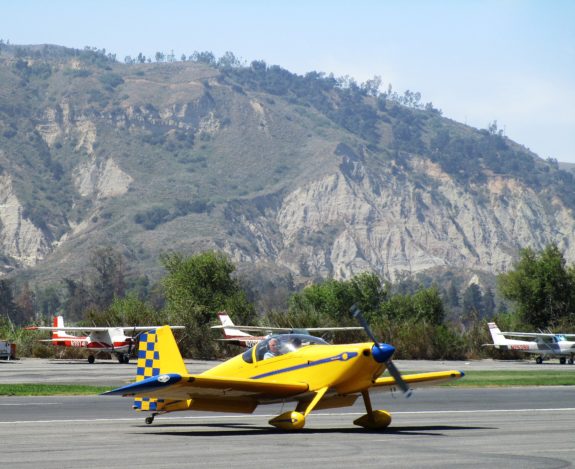 After the morning fog cleared we made a short 80 n.m.Â  hop to KSZP. Those hard rocks in the background made me gulp and suck it up on our left downwind, something they tell me you get used to.Â  I’m a slow learner and guessing that’s going to take a while. Thanks to Gia Bradley Koontz for greeting us at KSZP and shooting this nice arrival shot.

Gia Bradley Koontz (center) is an aviation author and historian from California who I have been corresponding with since making the decision to fly the perimeter. Yesterday, for the first time, we finally met. This fun and incredibly interesting woman arrived with coconut cake in hand, decorated with SZP glam. Time to party!!

Our wonderful host at Santa Paula is Lisa Kienholz, owner of this shiny Luscombe 8E. We’re happily sharing quarters with this pretty bird, overnighting in a private living area just beyond the tail. Lisa’s been fantastic, introducing us to pilots and friends across the field, getting us sneak peaks inside hangars, and telling us the history of Santa Paula Airport.

I’m happy to report there are LOTS of lady pilots flying out of Santa Paula, many of whom fly taildraggers. We met Jessica Bauman and her Pitts S1S.

Lucy Galgano and her 7GCBC Explorer with 160 hp

Peggy Watson Meinke who not only is a very accomplished hot air balloon pilot but has an incredible hangar apartment at SZP. 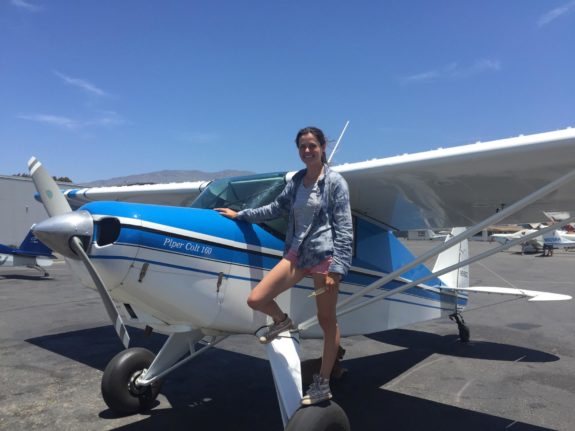 Kat Barilova and her Piper Colt

Kati Ganzer and her Experimental Cub

There are some pretty awesome hangar apartments at Santa Paula sharing space with equally awesome airplanes. This is Peggy Watson Meinke’s hangar and the Dewey Bird Racer “Super Cosmic Wind”, 1967.

equipped with a hydraulic lift to operate the suspended guest bed!

There’s so much more to show and tell about Santa Paula Airport and so little time. No worries though, this is one destination you won’t believe unless you come and see it for yourself. Hope you can make it happen too!