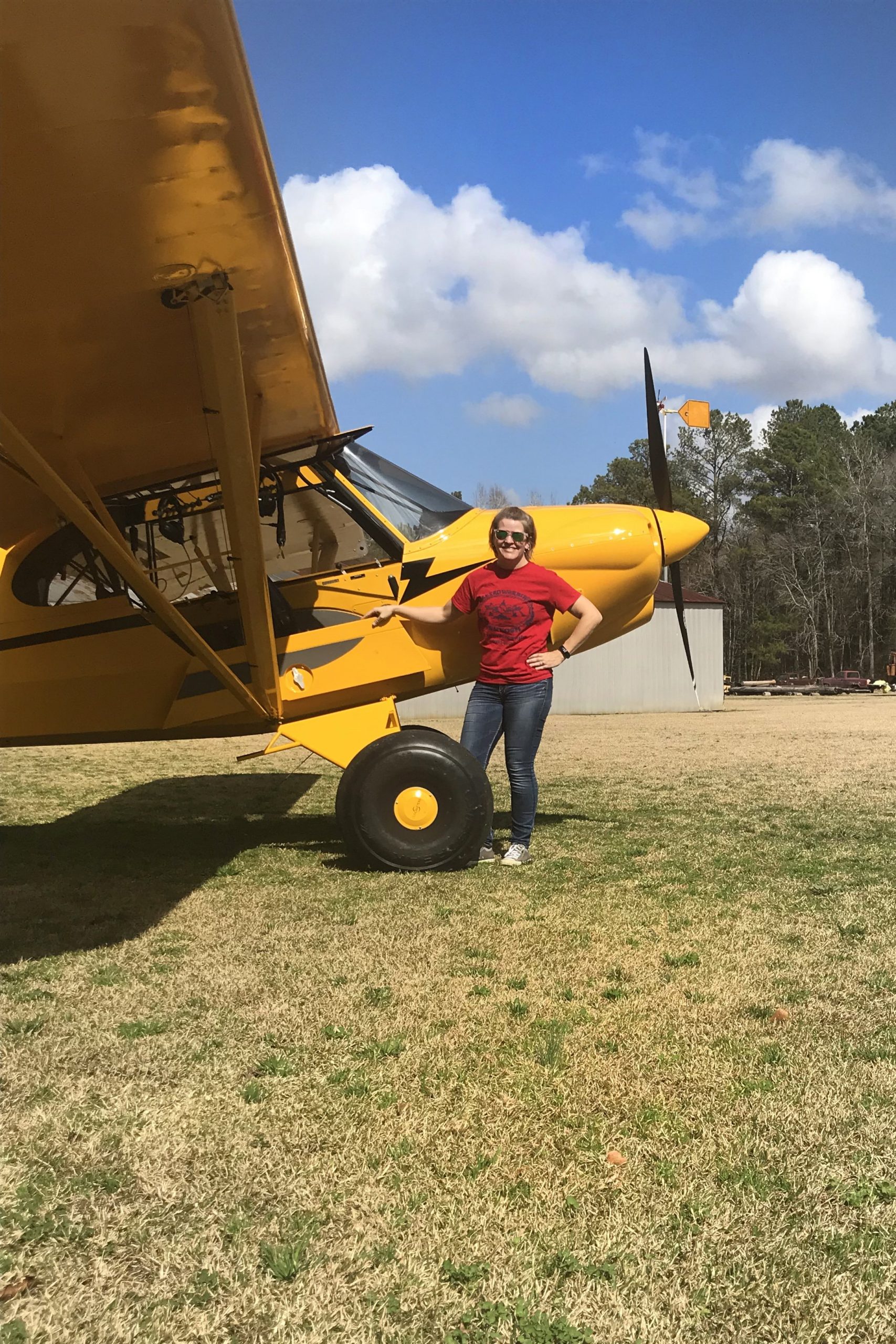 Thanks to Sarah Dickerson, winner of the LadiesLoveTaildraggers 2017Â STOL/Short Take Off & Landing Scholarship, for submitting this outstanding review about her experience training with Charles Lewis at South Oaks Aerodrome. Sarah recently completed her training which was donated at no charge to our LLT scholarship program. Instruction and aircraft were provided by Charles Lewis atÂ South Oaks Aerodrome,Â Winterville, NC. Charles’ STOL workshop teaches STOL techniques including how to get in and out of some very short fields in eastern North Carolina. There are 60 plus challenging â€œstripsâ€ within an hour of South Oaks Aerodrome, 05N, some nothing more than dirt paths on farms, hay fields or sod farms. Many thanks to Charles Lewis for his very generous donation.

Charles Lewis, CFI at South Oaks Aerodrome, Winterville, North Carolina and I had a hard time getting my schedule to line up to get this wonderful two days of flying on my calendar â€“ Charles is a very busy instructor, and my airline schedule had been insane. Plus as we headed toward winter, we had weather to worry about.Â We finally got a week set aside in February, with some â€œplayâ€ in the week to slide the
schedule one way or another if weather presented a problem. The weather actually was fabulous for us, for the most part â€“ with sunny highs of 80 degrees, near record highs for the area.

view from the front of the cottage where I stayed, looking across to airfield

We decided to do the flying on a Tuesday and Wednesday, and I headed to Raleigh-Durham on Monday evening. Arrival into RDU revealed fog, drizzle, and sometimes rainâ€¦.a bit disconcerting considering I was about to spend two days doing VFR flying! I drove the hour and 45 minutes to South Oaks, where I was staying in accommodations set aside for students directly across the street from the airfield. I met Charles and his wife Judy at the cottage, and they got me all settled in for the night. We made a plan to meet at 9am the next morning for some ground school, in hopes by the time we were finished, the fog would have burned off.

Fog from my cottage looking at the airfield Tuesday AM

Tuesday morning dawned VERY foggy and wet, and after I headed a half mile down the road to a small southern diner for a breakfast sandwich and coffee, Charles and I met at the barn at the airfield (literally 150â€™ from my accommodations) for some ground school. This barn is actually a really neat building with a kitchen and meeting space for the EAA chapter on the field. We drew traffic patterns on a large roll of white paper and discussed how I was used to flying in my plane versus the way Charles usually taught it, and the nuances of the Legend Cub I was about to fly.

We chatted about nonstandard approaches and landings, and techniques to get both off the ground quickly and on the ground and stopped quickly. I warned Charles that Iâ€™d not flown my own airplane (a 1947 Cessna 120) in a couple of months due to (mostly) winter and my work schedule, and because of that Iâ€™d probably have all kinds of negative transfer from the work jet. We took a brief break and by then the ceilings were rapidly lifting, and we went down to the Legend Cubâ€™s hangar to do some â€œchair flyingâ€ in the plane.

By the time heâ€™d shown me all the whys and hows of the airplane, we were good to fly weather-wise, and got the plane out and prepared to head out. The sun was rapidly popping out and the temperature was going skyward just as quickly!

We headed out for some pattern work at South Oaks, first just getting a feel for the airplane (starting out on the ground â€“ Charles had me taxi the plane in a serpentine in and out of the yellow cones marking the runway edge to get a feel for the aircraft), and then honing my technique a bit. Charles talked a lot about envisioning an imaginary glideslope on final, not unlike an ILS, and rather than using landmarks to fly the pattern, to adjust the pattern such that I was hitting the â€œglideslopeâ€ at the appropriate point and altitude as I turned final. We also concentrated mostly on power-off approaches. Charles worked on getting my flying a little less mechanical (he called my stick movement â€œbutter churningâ€, ha!) and getting me to be a bit more aggressive on my slips. More on that later.

After about 10 times around the pattern or so, we took a break, and Judy met us and we all drove into town for Chinese for lunch.

Me at Pine Top

Pine Top, gentleman is the owner of the property

We returned to the field and took to the skies again for another 2 and a half hours of flying, this time hitting various grass strips all around South Oaks. They were EVERYWHERE!! We landed on long strips, short strips, strips with difficult approaches (tall obstacles, namely the 100â€™ trees that inhabit the area in great numbers) â€“ it challenged me to the core especially in a plane with no flaps. I was frustrated at one point that I just was not slipping aggressively enough – I wrote it off subconsciously to my dead legs from a 12 mile run the day before. I felt I should have done better since I OWN a plane that doesnâ€™t have flaps, and slip constantly while flying the 120.

We did crosswind work at one field, and we did long takeoff rolls down the runway bringing the plane up on one wheel but holding it to the ground, finessing stick and rudder to keep the correction in, finally letting the plane fly nearing the end of the runway. We dropped into an old farm field with an Ercoupe at one point, shutting down to add our names to the hangar wall as was the wish of the owner of the strip.

adding our names to the hangar wall at the farm strip

We dropped into a 800â€™ RC strip, which challenged me to the utmost. We landed at a beautiful golf course strip, smooth and long as can be, but lined with trees all the way down to a small cutout of an approach which allowed the winds to swirl crazily around as you descended between them. We stopped at a friendâ€™s field, and visited a while with him while enjoying the stunning day that had developed. We finally headed back to South Oaks, but not before Charles asked if I wanted to do a real dead-stick landing into a huge, perfectly flat field near the airport. Sure! As long as he trusted me, I said. As long as you give me the controls if I ask, he said. So onward we went â€“ and the plane flew about as I expected it would, as I flew a pattern down onto the field. Charles had to step in and get a SLIP going (ahem), but other than that, it went well. WeÂ  returned to South Oaks and called day 1 a wrap. When we were putting the plane away, I expressed frustration at my slips, and it was at that point I realized my true issue â€“ the seat not being adjustable, and the same with the rudders, I was stretching my leg fully to actuate the rudder anywhere close to the floor. I wish Iâ€™d spoken up earlier so I could have put something behind my back, but oh wellâ€¦.live and learn. Charles asked if I wanted to fly the Legend Cub again on Wednesday or try the Sport Cub â€“ I reasoned Iâ€™d try the Sport Cub, just for the sake of doing so. We agreed to meet at 9:30, once again as we knew thereâ€™d be some morning fog. I headed into town for some North Carolina barbeque to bring back to my cottage (hey, I had to know if it was REALLY better than KC barbeque), and tackle a couple of recurrent courses for work.

back taxi at Red Church

Wednesday dawned foggy â€“ again â€“ but it cleared a bit earlier this time, and I headed to the EAA â€œbarnâ€ at 9:30 and Charles flew the Sport Cub over just a short while later (he keeps this particular plane at his house and grass strip, just a mere 3 miles away). We prepared to head out right away, this time joined by his students Gene and Daniel (his oldest and youngest students ever, respectively) in Geneâ€™s Highlander. We flew to another RC strip and did a few landings, which was perhaps even more challenging than the RC strip from the day before due to trees and power lines, but I loved the addition of flaps in the Sport Cub, and I loved the toe brakes even more 😉 (I feel like I have two left feet when I fly with heel brakes, which Iâ€™m sure will leave some of you aghastâ€¦.but sorry, Iâ€™m just not a big fan!). In short, I loved the Sport Cub. I felt at one with it off the bat. Not that I was perfect, but I was having even more fun than day one, if that is possible! We departed the RC strip and headed to Charlesâ€™ friend Mikeâ€™s strip just a couple miles away, and he joined the fun in his Husky. We headed out to a number of strips from there;Â  including a great two- runway grass airport where we landed on both, one into the wind and one with a stiff crosswind. We headed to a strip called Red Church, so named for a church with a red roof at the end that was being remodeled by a woman who unfortunately passed during the time she was working on it. Sheâ€™s buried on site.

We headed to the most challenging strip yet as well; Pine Top, a small field belonging to a local farmer that is probably 800â€™ long on a good day, and one-way in, one-way out with very tall trees lining one end and a culvert marking the approach end. I was having fun by now; I really got along well with the Sport Cub. I was able to refine technique a lot on this day; from keeping the stick forward when turning the plane to lighten the tail, to fine-tuning my technique on the takeoff roll to get off the ground quickly and safely. It wasnâ€™t all perfect; sometimes in my haste to get the plane DOWN, Iâ€™d plunk it on the ground. Sure, it stopped fast, and with the tundra tires you can just let it drop and it sticks, but itâ€™s certainly not a beauty landing. Finally, on our last landing arriving back at South Oaks, I had a nice short landing that was painted on to boot, and that was a great way to end things.

All too soon it was time to end my flying and head back to RDU to fly home to Kansas City. I hated to leave and even toyed with adding a day. But alas, a second ice storm was heading toward home, and I needed to get back before things got messy again. I instead vowed to come back for more flying sometime soon, this time hopefully bringing my husband Jim with me. Whether you are starting private pilot training, wanting a tailwheel endorsement, or wanting to do more advanced tailwheel training, South Oaks Aerodrome is the PERFECT destination. Charles is an excellent, patient instructor and the field has the Legend Cub, Sport Cub, and at least a couple of J3s available to fly. You can find out
more about the field and Charles Lewis at www.southoaksaerodrome.org!