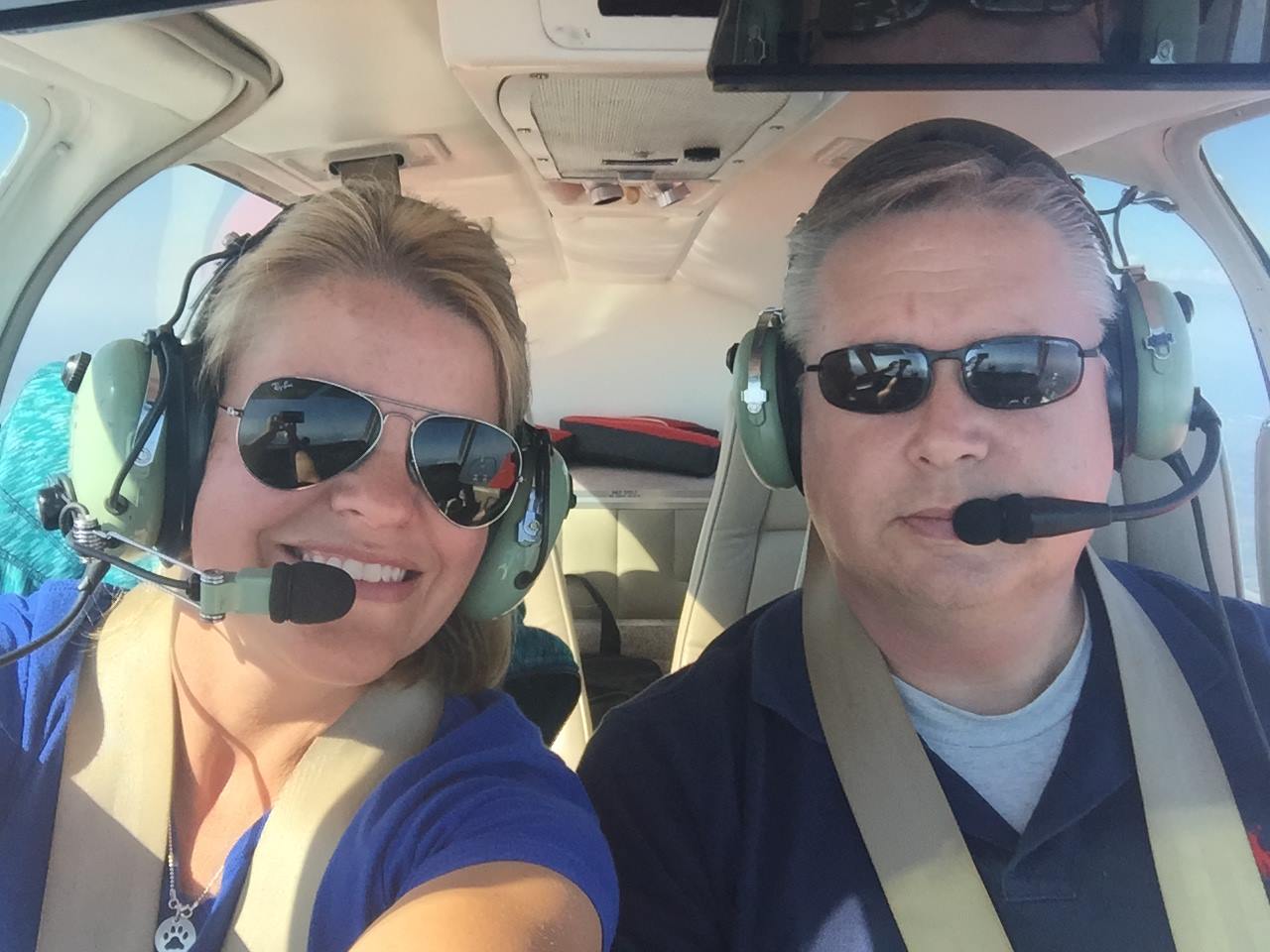 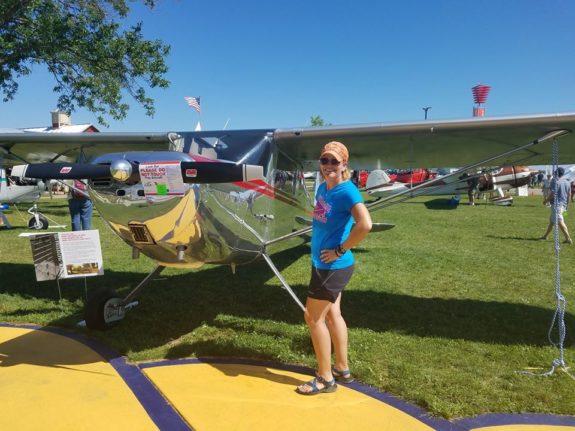 My love story starts with my love affair with aviation – I was bitten by the bug as a preteen, and was determined to become an airline pilot. However, I also had a love for horses and my heavy involvement in competing on the horse show circuit meant a tough decision not to pursue my dream as I entered high school and college.
Â 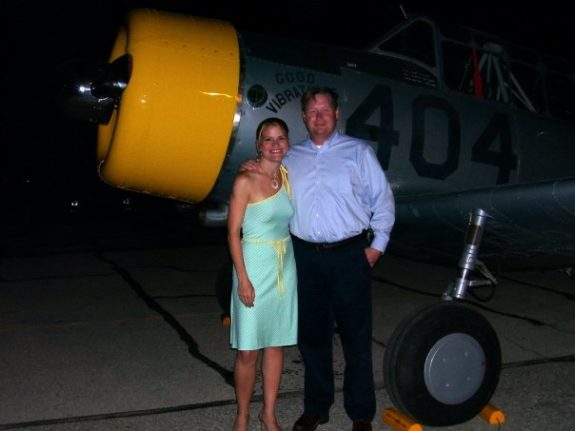 Eventually, however, the bug reappeared and I found myself buying Flying magazine and Plane and Pilot and reading them over my lunch break at my graphic design job every single day. I took the plunge and pursued flight training after selling my promising younger show horse, which financed my private and instrument ratings. 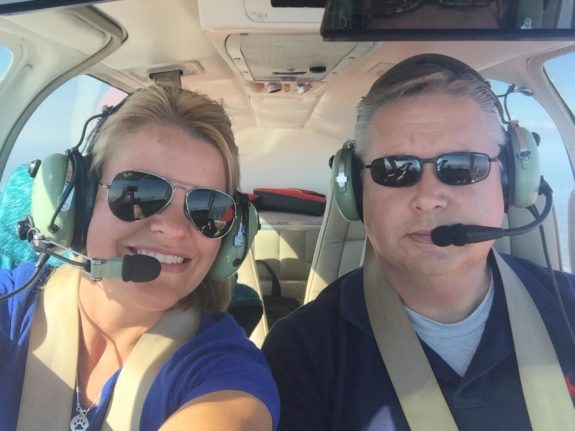 Completely smitten with all things aviation, and being obsessed with TWA history (my great-grandfather flew for the airline in the 1930s), I began volunteering at the Airline History Museum at the Charles Wheeler Downtown Airport in Kansas City. My experience in graphic design and writing led me to a spot on the marketing committee, where I first met Jim. At the time he was working for a law firm and flew their Bonanza, and I was working on my commercial single-engine rating. He needed an occasional safety pilot, I needed someone to pick apart my chandelles. We flew together occasionally – and one day a long while down the road, quite by surprise, I casually mentioned my companyâ€™s Christmas party and Jim asked as I needed a date.
About 12 months of dating later, we were flying the Bonanza back from Springfield, Missouri and his familyâ€™s Thanksgiving dinner. It was also my birthday that day. Jim asked me if I wanted to call Kansas City approach and cancel IFR, so we could circle the Country Club Plaza a couple times to view the famous Christmas lights that had just been turned on for the season earlier that evening, as is tradition. I did, and as we started to circle, Jim asked me if I wanted to shoot some video. Smart guy, distracting me like that while he fished out the ring box from behind my seat. I turned to see what he was doing, and he asked if â€œhe was my captain, if Iâ€™d always be his copilotâ€. Of course my response was (after saying â€œYES!â€) â€œbut why canâ€™t *I* be captain?â€ 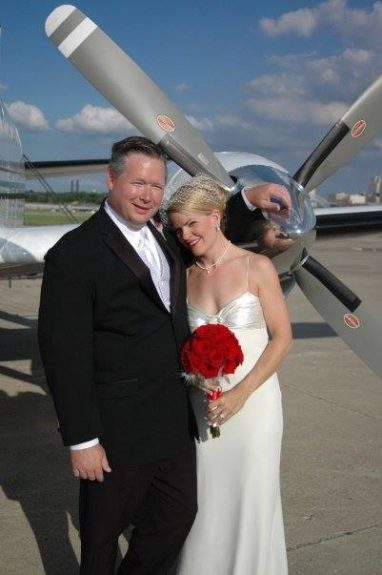 Â We were marriedÂ six months later, and of course the entire wedding day was centered around aviation. We chartered a King Air for our ceremony, which carried our mothers (our fathers having both passed), my sister, Jimâ€™s brother, the photographer and officiant. We tied the knot in the skies over Kansas City, and arrived at a large hangar reception at the Leeâ€™s Summit Airport (KLXT) with our friends and family awaiting our arrival. The hangar dance was styled after a WWII USO-style event, complete with a big band and swing orchestra, the Moonlight Serenade Orchestra. 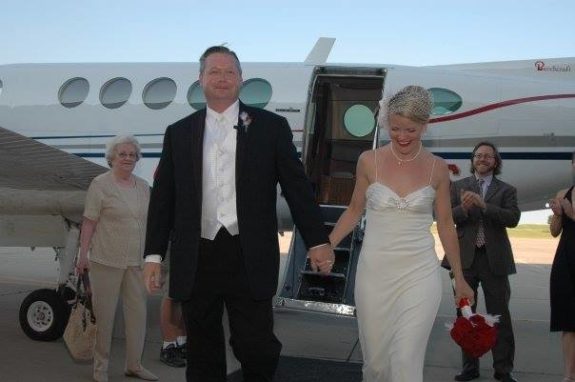 Â Later that Summer (2007), part ownership became available in the very plane that made me realize I HAD to learn to fly – a polished 1947 Cessna 120, N120VW. Jim urged me to purchase the share and he joined me later on that year with his own piece of the plane. Since that time, weâ€™ve enjoyed many incredible trips, overnights, and fly-outs in the little plane – including numerous visits to New Holstein for theÂ SuperCub.OrgÂ fly-in during Oshkosh and Oshkosh itself.
Â 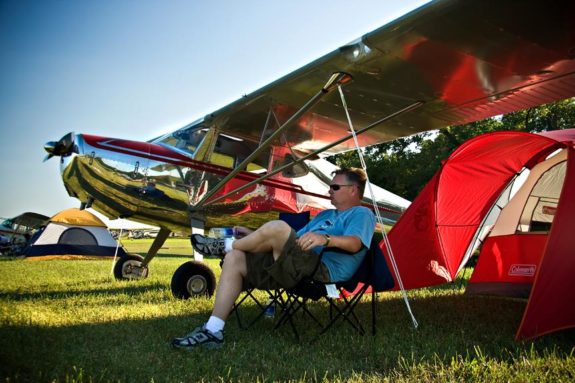 In 2015, my desire to be an airline pilot resurfaced, and now I knew mid-career if I wanted to take the plunge, I needed to do it NOW or potentially live with regrets. I took Jim to a fancy dinner date to propose the idea. But I was nervous, and soon we were waiting on our check and still hadnâ€™t brought it up. Finally, Jim said â€œwhy did you take me to this fancy dinner anyways? Is there something you want to tell me?â€ The man always HAS been able to read me like a book. I anxiously spilled the beans, and he sat in silence for a short while. Uh oh, he thinks itâ€™s a bad idea. â€œWell what do you think?â€ I finally asked. â€œ…Iâ€™m proud of youâ€ was his response.
So here I am, a first officer on the Embraer 145 at a United Express carrier. Iâ€™ve been flying for the airline for 18 months now (just a couple months from my two year anniversary of my hire date), and after several months on the line guess who sat ME down to talk to me? Yep. There are now two First Officer Dickersons at my company.
Â 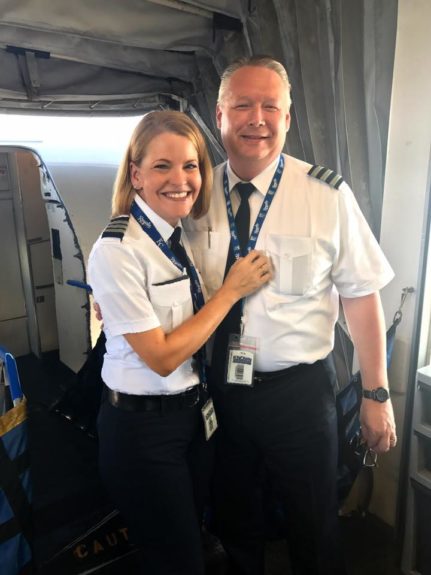 Iâ€™m getting closer to captain upgrade with each passing day, and I anxiously await the day Jim and I can fly as a crew. It will be so very special. And….I WILL be his captain after all! Haha.
As an aside, Iâ€™m writing this on a deadhead flight to Denver from St Louis to start a trip. A young boy in the row ahead of me has his face glued to the window, a HUGE smile and look of amazement on his face, and there have been several â€œwow!!!!â€ comments. Just like a feel good airline commercial. It literally choked me up. I was him at one point. I just dug a set of wings out of my flight bag to give him when we land. Yes, there are many types of aviation â€œlove storiesâ€. Maybe Iâ€™ll help do my part to start a new one today.