Remind me girls, please, what century is this?! It’s not 1912 but sure could be, at least in Dallas, TX, by the likes of this newspaper revelation. Of course, this really isÂ 2012Â and as an adult, in this blog, I have the freedom to pick my topics, write what I please, forward to whomever I like and feel content that I live in a society full of choices for women. Â The same choices available to men. Turns out that’s not entirely the case, at least for 5th grade girls that live in Dallas. 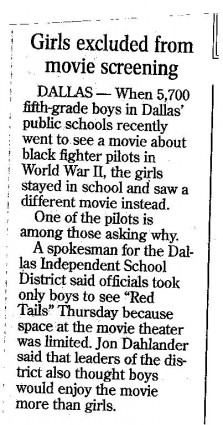 When a friend forwarded this to me I thought it surely couldn’t be real. (Ya know you can’t trust as fact what you read in the paper.) It had to be a hoax because no school district in this day and age would hold gender-specific events and exclude 50% of the student population based solely on gender. Wow, was I ever wrong.

I’m angry and have no doubt I’m not alone in my reaction. I am particularly offended because the offense involves young girls and the stereotypical assumption that girls wouldn’t be interested in aviation. WHAT?! You send 5,700 5th grade boys to see the new movie “Red Tails” and you leave the same number of girls back at school to watch a “more appropriate” gender-specific movie? What is particularly amazing is that it happened with the movie “Red Tails”, a movie about equality! Ladies, I hope the Dallas Independent School District hears a very loud roar from around the country and evaluates this practice from the Dark Ages.

Note: I posted the above story on Facebook this morning and there are many heated comments coming in. Â I’d like to suggest you send a personal email to the Dallas School Board as a show of support for their young female students. I’d also like to thank Susan Theodorelos for her passionate letter to the Board. Â See the following. Judy B

I’m posting my email to the school board everywhere I can in addition to sending the email to them.
Dallas School Board,

What a prime opportunity to educated young minds on the glories of aviation, the ultimate sacrifices made by military members during World War II and, most importantly, the extraordinary feats of the Tuskeegee Airmen.

I would invite your attention to the thousands of women who supported the amazing efforts of this country during World War II. In fact, many of those women TAUGHT Navy and Army Air Corps pilots how to fly! Numerous women like Edna Gardner White and Pancho Barnes had flying schools teaching “everyone” to fly. In fact, Edna Gardner White had a flying school in Texas! Why on earth would you think that young girls would rather see a movie about a spelling bee? Is that the message you are tying to give young girls in your classrooms? That they can aspire to be in a National Spelling Bee but not fly a P-51 Mustang? As a lawyer, pilot and former Navy Officer I am offended and outraged.

I would posit that the federal money you spent to send all those boys on a school outing would have been better spent to have the Tuskeegee Airmen survivors come to your schools and have a discussion with your students after a showing of the film at the school!

I understand that the Women in Aviation Organization is holding their National Conference in Dallas next month. Perhaps you would track down some additional funds to take all the young 5th grade girls to meeting the thousands of women pilots who not only enjoy the pleasures of being a private pilot, but that also transport hundreds of thousands of people on a daily basis in commercial airlines, travel into space, and fly multi-million dollar jets as Army, Navy and Air Force pilots.