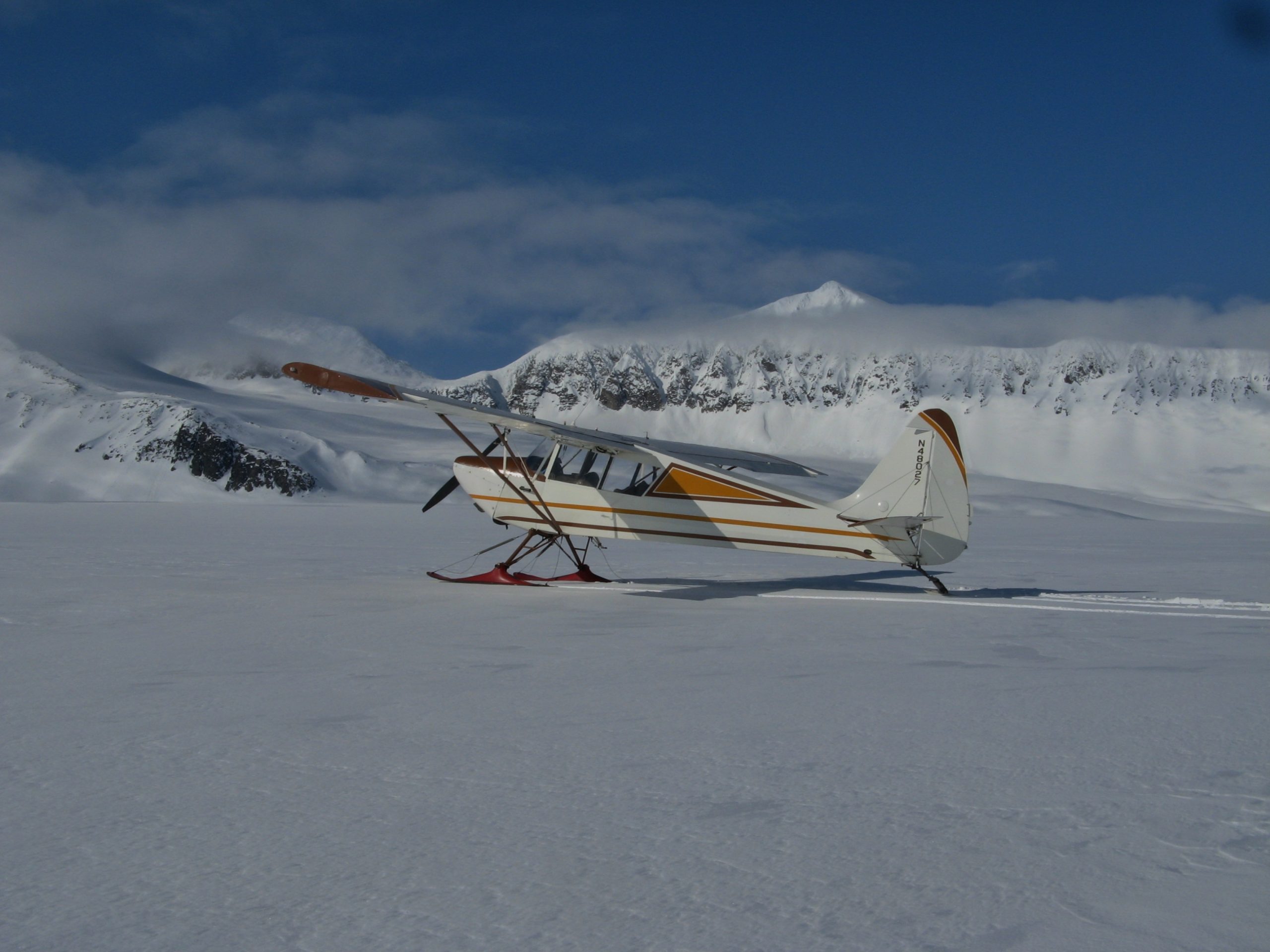 If you send me an email that involves taildraggers and awesome destinations, it just might appear on LadiesLoveTaildraggers!

Alaskan pilot, Bill Quirk tells me, “Make a visit to Alaska to enjoy the best in ski flying operations. Harding Icefield is only 74 miles south of Merrill Field in Anchorage, Alaska.”

The massive Harding Icefield which is over 700 square miles in size (30 miles in length and 15-20 miles in width) is 74 air miles south of Merrill Field on the Kenai Peninsula. It is roughly a 3,000 to 4,000 foot mountainous plateau trending northeast and southwest that is covered with a layer of 1,000 feet of ice from thousands of years of snowfall of several hundred inches per year. All of the ice first came down as snow and after many years of immense pressure from the weight of the snow was transformed into ice. Unlike glaciers, icefields are flat on top and the ice does not flow but remains static.

Nevertheless, the Harding Ice field does have 3 dozen glaciers flowing off the edges of it into lower elevations. The icefield also has magnificent mountains all around it. A few mountains on the icefield stick up through it and provide an incredible scenic value by breaking up the tabletop flatness of the icefield. Alaska has only 4 major icefields and all are very special and beautiful. Very few people in Alaska fly their airplanes and land on these remote wonderlands. Even fewer visitors to Alaska schedule trips to see our unique icefields. These magnificent icefields are Alaskaâ€™s hidden gems and people would revel at seeing them.

Ever since placing skis on my airplane for winter flying I wanted to land on the Harding Icefield. It is so remote and massive that it intimidates me and I would not think of flying down there alone and landing on the icefield. Dee at Merrill Field told me he would guide me there in his Piper Super Cruiser. This was a few years before 2010. Dee took off from Merrill and I was right behind him in my Arctic Tern. We arrived on the icefield and Dee went in and attempted to land. He gently touched down his skis and then quickly lifted off. He told me the wavy snow was hard as concrete as the airplaneâ€™s skis rattled. This can break your skis if you attempt to land. We flew over the entire icefield and Dee dragged his skis in several additions places and the wavy snow was too hard for a safe landing. We left without a single landing. I was fortunate having Dee along to prevent breaking my skis and having to call for help.

Finally on January 23, 2010 Dee and I landing our airplanes on the southern and highest part of Harding Icefield at 5,600 feet elevation. We made 2 landings that day. It was a beautiful sunny day and I was so excited for finally being able to land and walk around on the massive icefield. We could see to the north for about 20 miles over the icefield covered with fresh snow. We could also look to the southeast and see the Pacific Ocean. I will never forget this glorious day that I had been waiting so long to achieve.

The Harding Icefield is so beautiful and attractive that I would like to go there every winter. What holds me back is that it is difficult to find pilots that are willing to fly there with me tagging along. I donâ€™t like to make this kind of flight by myself as I am somewhat terrified with the remoteness, the huge massive mountains and the gigantic icefield. On March 26, 2019 I flew down to the Kenai Peninsula to fly in and land on Twin Lakes at the head of Benjamin Creek which flows into the Killey River and into the Kenai River. Twin Lakes is 65.5 miles south of Merrill Field. I had heard about Twin Lakes and wanted to go there. I landed on upper Twin Lake at 2,600 feet ASL. The snow covered ice was perfect for a smooth landing. The mountains around the lake were spectacular and the snow covered hills were there for great cross-country skiing. I need to bring Peter down here for skiing on the hills. When I flew out of Twin Lakes I continued eastward toward Skilak Glacier. This is a gigantic glacier coming off the north side of the Harding Icefield. I circled around and I could see the icefield. I thought that this would be an easy approach to reach Harding Icefield. I knew I would not be able to find anyone to fly down here but I decided that it would not be too scary and that I could do it without too much stress. This got me excited about making an airplane flight and landing on the icefield in the coming days.

Two days later on March 28 I decided to make the trip to the Harding Icefield. The weather was sunny with a few clouds. Visibility was not a problem flying to the Kenai; however, that may be different on the massive icefield that could be fog covered with the south winds coming from the Pacific Oceanâ€™s Gulf of Alaska. The winds aloft at 3,000 feet were estimated to be 10 miles per hour and at 6,000 feet at 16 mph. This is acceptable although it will be a little bumpy. You never know for sure until you fly out and see for real what the weather conditions are. It was a little bumpy and slow due to flying into the 10-12 mph south winds. I was flying at only 80 mph. The massive Skilak Glacier is over 2 miles wide at its narrowest point with mountains on both sides as it climbs up from its toe at 500 feet ASL to over 4,000 feet on the icefield. With such a wide pinch point this large glacier should not have the turret effect with wind speeds escalating to high numbers such as 30-60 mph with heavy turbulence. This would certainly be a show stopper and I would have to turn around and head back to Merrill and try on another day. As suspected the winds were low and not turbulent and so I few on up to 4,000 feet reaching the Harding Icefield. There were a few misty thick fog banks in a few locations on the icefield and covering mountain tops. I can avoid these and should not have any problems. I would just need to watch in all directions and be ready for a quick takeoff to fly away from fog banks that are moving in my direction. I found a flat place on the icefield at 4,000 feet and decided to land here. It was a smooth landing with deep packed snow that was hard enough that my skis sunk into the snow only 1-2 inches. I did not need my snowshoes walking on the icefield. I noticed that the wind had increased on the icefield to 14 to 20 mph.

It was a steady wind from the southeast but was not a problem. It was 30Â° F and the wind made it chilling so I pulled my jacketâ€™s insulated hood over my pilotâ€™s cap to keep warm. I took off from the landing area and circled round on the icefield before landing a second time. Arriving back on the Harding Icefield after 9 years after my first landing was an important event for an
Alaskan pilot who is highly inspired by the scenic wonders of wintertime snow and ice in Alaskaâ€™s coastal mountains. This is something that I will cherish for life and am so fortunate for having the opportunity for making it happen. This is why I live in Alaska and why I would be shortchanged by living elsewhere.

The Alaskan coast is the showcase of the entire world for its mountains, glaciers, icefields and fjords. It just happens that the only way to really see it up close is by making special flights and landings in a ski- equipped airplaneâ€”nothing short of this will provide everlasting benefits. Since I have my own private airplane, I will always plan to take advantage of this world class adventure. This is what living my life in Alaska is all aboutâ€”taking advantage of the incredible world class scenic wonders.

I look at this adventure as the future remains unpredictable, where every decision involves some level of risk. Sometimes you can go beyond risks by knowing that there is infinite intelligence at work in the hidden dimensions of your life. At the level of this intelligence your choices are always supported if you have a strong background in the subject of your riskâ€”flying airplanes. Not that I want to make too many difficult and risky decisions; nevertheless, once in a while I will choose to push it a little bit to make enormous gains in my life. With no risks; you will make very little gains in your lifetime. I would say that I always attempt to make calculated risks that may be a little scary but are relatively safe and provide me
with the opportunity to live another day, month and year in Alaskaâ€™s wilderness paradise.

I have made many ski-equipped airplane flights to land on the massive glaciers in the Heart of Denali National Park near Mount McKinley and never seem to be intimidated by flying in alone from Merrill Field which is 125 air miles in distance. The reason for the difference is that I always see and am in communications with the many scenic flights from Talkeetna. I know of only 1 airplane in Seward that takes scenic air tours over the Harding Icefield (summer only). They donâ€™t fly many trips there and they donâ€™t land on the icefield. They fly quite high over the edge of the icefield and you may not see them.