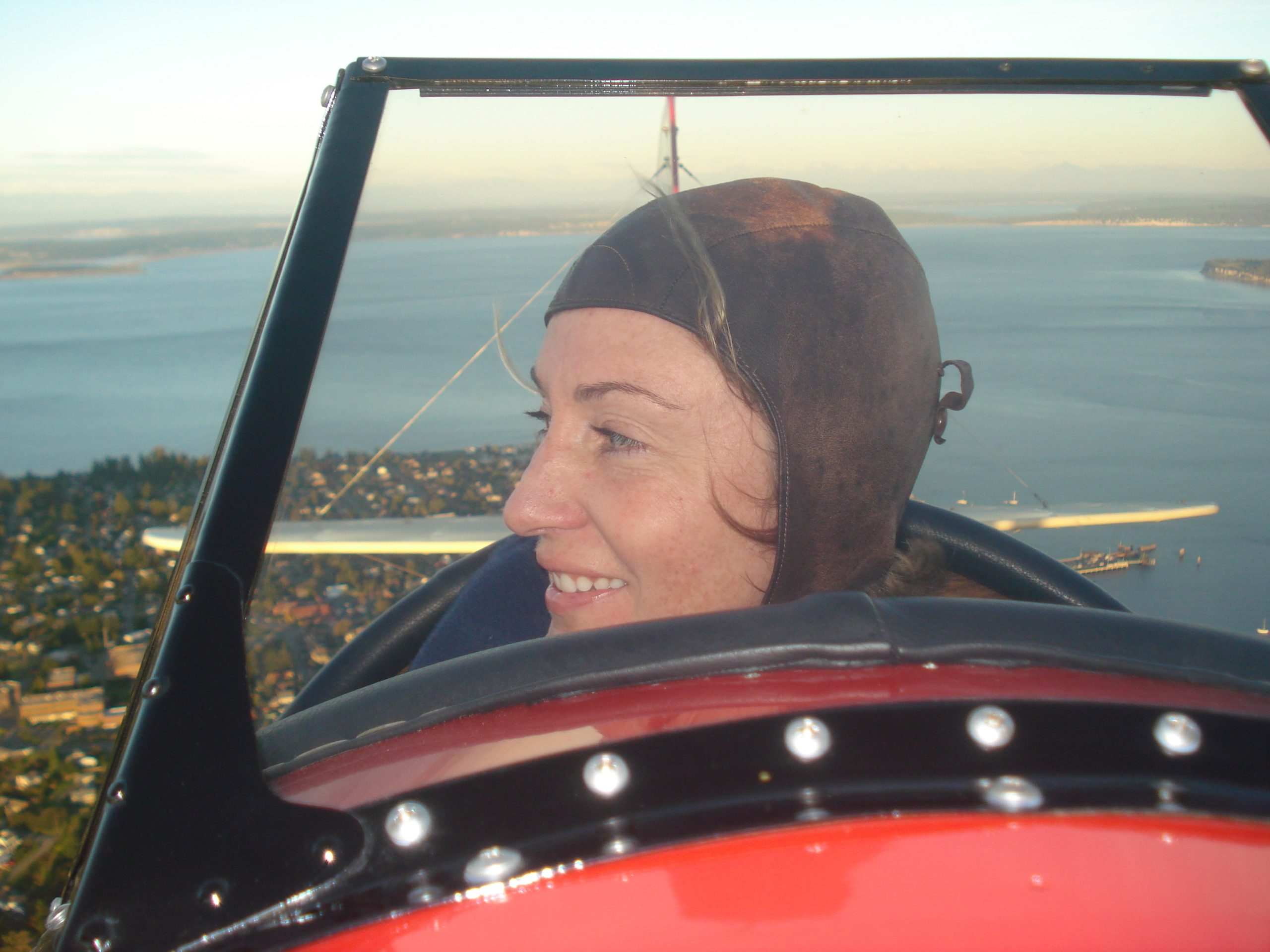 Every so often a new pilot comes along & joins our merry band of lady taildragger pilots and her aircraft… its history… her story… are so remarkable that I can’t wait to share it with you all. This is one of those times. I hope you join me in welcoming Summer Martell to Ladies Love Taildraggers and enjoy her beautiful biplane and remarkable story! Summer is based atÂ 0S9, Jefferson County International Airport, Port Townsend, Washington.

One of 6 Student Princes ever built by the Aircraft Builders Corporation in Portland, Oregon, my father’s airplane N10686 s/n 103 was the third and last certificated airplane to roll out of the factory doors before the company folded due to the Depression. Â Three incomplete Student Princes were donated to a local A&P school to be assembled by the students as “Experimental”. Â There are currently 3 Student Princes flying. Two factory built and one Experimental. All 3 in Washington state. Â What follows next is a love story……

I hadn’t spent much time with my father due to my parent’s divorce and my living in Alaska and he in Washington. Â But that all changed when I began receiving enthusiastic letters from him describing his flying lessons and then, the purchase of a 1931 open cockpit biplane. Â He even had an artist paint “Lady Summer” on its cowling for my 15th birthday. Â Intrigued by his letters, pictures of his biplane, and books by Richard Bach, I asked him if I might come to stay with him and learn to fly. He sent me a postcard with a line drawing of a Waco ASO on which he’d written “Come on down!” And I did.

I began flying lessons in the Student Prince, and soloed in August of 1985 at the age of 16. Â Dad and I spent time together barnstorming on the Pacific coast. We’d land at small airports, hang a banner and start hopping rides. Â We’d sleep under the wings at night. Â It was a magical time…..

Two weeks prior to my private checkride, my father died unexpectedly. I received support from our local airport community when everyone, even the fry cook at the airport cafe, donated and raised enough money for me to complete my training and earn my pilots license. Â At age 17, I had become the unlikely owner of an extremely rare airplane. Â Even though it was a struggle to support, I never once considered selling the Student Prince. I pumped avgas, I waited tables, and fished commercially in Alaska. Â I lost count of how many times I was threatened with hangar eviction due to late payments, but I always managed to squeak by. Â It astonishes me now to look back on it all. Â Youthful bliss coupled with determination I suppose….At 19 I earned my commercial license and promptly put the Student Prince to work hopping rides as Dad and I once did. Â So many strangers put their trust in my youthful hands and it was my privilege to introduce them to the thrill of open cockpit flight. Â I met so many people, had so many adventures, and learned so much from the Student Prince.

25 years later, the Student Prince has recently emerged from a several years long complete restoration. Â It is better than new, and I am rediscovering it again. Â As with any first love, there is the exhilaration of reuniting, the ease of familiarity, and the reconnecting with a deep love gained over so much life that it is poignant beyond words. As always, when it comes the two of us, I am the student, and it is my Prince.

I hope I didn’t overwhelm you with my story. And that’s the Readers Digest short version! At any rate, I also own a 1946 Cessna 120. I am an international corporate jet captain, qualified in 3 different jets. Â And I am also a designated pilot examiner. Â But really, I’m still just a messy haired, greasy jean wearing, biplane pilot! Â Thank you all for such a fun organization, I look forward to meeting some new “sky sisters” soon!