in Blog by Judy Birchler 2 Comments
0 Likes
Susan Theodorelos and Andy Heins flew the Waco to Brodhead, WI for the big fly-in Sept. 9 – 12. Â Thanks for sharing your fun trip with us, Susan!
“We flew a 1935 Waco YKC-S NC14620 – Â My hubby’s plane … although I’m not checked out in the plane — I do a lot of the flying from point A to point B! Â It is a great old bird — and it’s pretty much — “”if you can get it through the door you can take it with you!”” Â She is a lot of fun to fly — big old steering wheels and windows that roll down – which we affectionately call our “”Thermostats””. Â She’s powered with a 275 Jacobs engine and carries 70 gallons of gas and 5 gallons of oil! Â The FBO’s LOVE to see us taxi in for gas! Â We flight plan a fuel burn of 16 g/ph… ugh! Â But the “”fun factor”” really out weighs the fuel cost!” 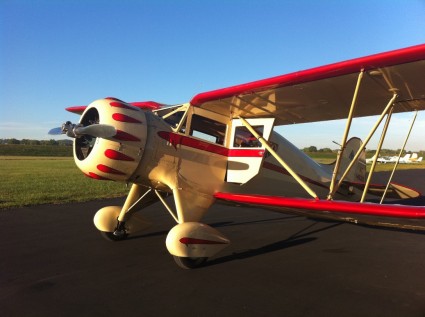 Susan loaded up and ready to go!

“We pushed the Cabin out of the hangar about 8 am on Thursday morning to skies so blue and air so nice and crisp, it was unbelievable! Â Normally, riding in the Waco cabin in summer weather can be like a sweat lodge experience…but today was going to be just lovely! Â After filling up with fuel, we rumbled down 26 and were on our way!
We left from Â Moraine Airpark (I73) VFR direct to Koerner’s Aviation (3KK) just across the Indiana border in Illinois. Â Stopping there is like taking a step back in time. Â N/S & E/W grass runways and a big old hangar straight out of the late 20’s! 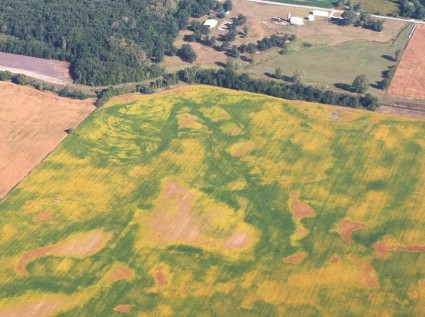 We popped up to about 4500 MSL to stay clear of Muncie airspace, and I looked down at the GPS and we both cringed…. 88mph GS?? Â Oh boy — this is gonna be a while! 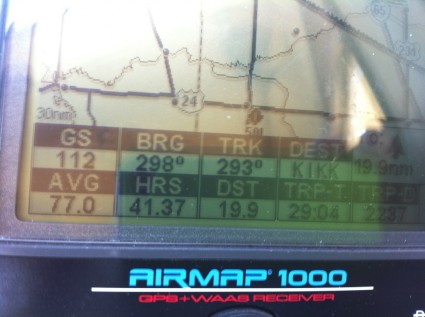 What I did next was probably hateful to some but — I pulled out my iPhone and checked the winds and we decided that after we cleared Muncie we would drop back down to 2500-3000 MSL to see if we could make a bit more speed there. 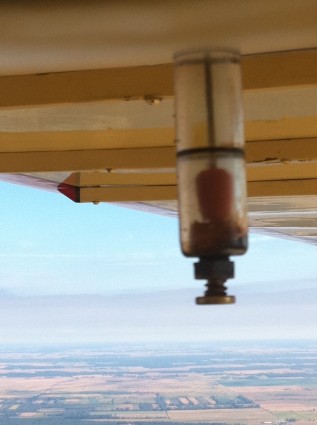 Ran that one dry!

I was sitting with my head on my hand, elbow propped on the window sill of the cabin just enjoying the view and kaleidoscope of colors when the engine coughed… I’M AWAKE! Â Someone forgot to add in a couple notches of mixture before we descended back down! That always gets your attention! Â Oddly enough, we picked up a good 20mph GS at the lower altitude … ahhh…much better… at least the cars weren’t passing us at this point! 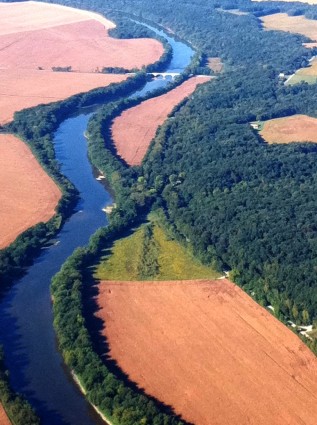 The skies were clear as a bell and you could see forever. Â We passed over the Wabash River and acres and acres of fields that splashed all sorts of colors from deep green to bright yellows. Â I was at the controls, air was smooth as glass, just a couple fingers holding the wheel… and you sometimes have to pinch yourself — “”Am I REALLY this lucky??”” 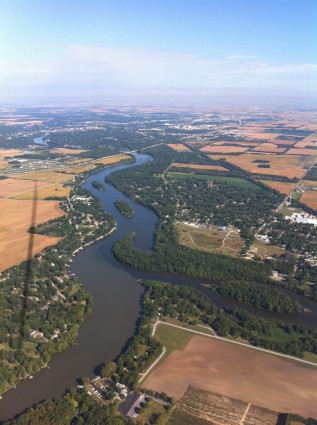 It wasn’t long before we could make out Greater Kankakee Airport (KIKK) in the distance…and just beyond — the familiar old hangar of Koerners! 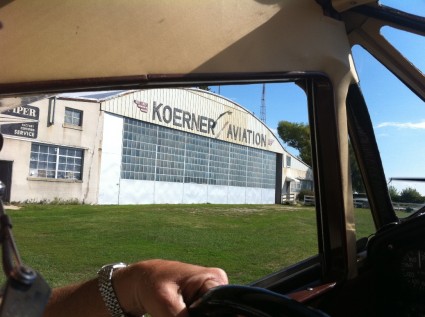 Andy took over for landing the big, old beast and I snapped a few more photos before landing. 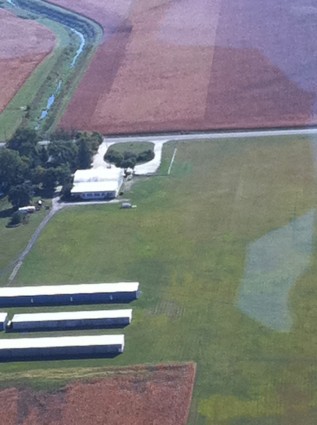 After visiting with Steve and Roger for a bit — catching up on the “”goins on”” for the past several months, we topped off with fuel and rumbled down 26 again. Â Andy climbed up and turned right and pointed the nose of the old girl back around for a “”So Long”” pass down the runway… We climbed back up to 3000 MSL and toddled along… it was hard to imagine we hadn’t seen another plane during the 2 hours to Koerner’s…it was too beautiful NOT to fly!
Just as we got skirted around the Class B airspace of Chicago and started the turn north to Poplar Grove we passed over a corn field which we originally though was Â a maze…but a closer look showed this was a tribute to the Armed Forces with a soldier holding a rifle with “”America”” written next to his right shoulder — just below in another field was a P-51 carved out of the corn! Â Just beautiful and worth a turn back for a photo! 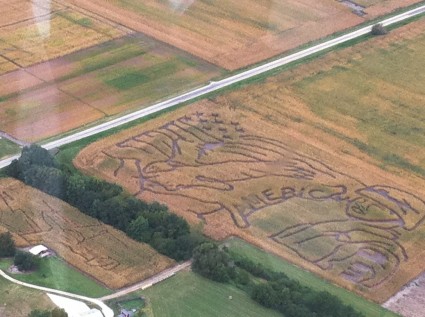 As we turned back north again, the sky was looking rather ominous and dark to the Northwest…””Hmmm…wonder what that is?”” Â So I did it again, I fished out the iPhone and pulled up the radar… “”Oh…THAT is what that is…”” Seems a line of storms was brewing and building north of our ultimate destination, so we kept a wary eye on it as we toddled north and dropped down in to Poplar Grove! 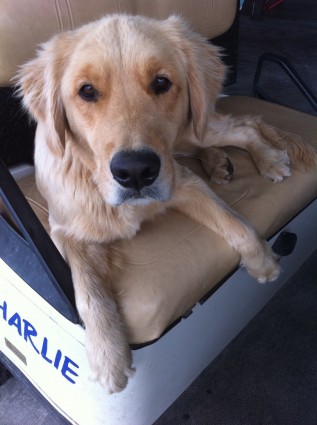 If you’ve never been to Poplar Grove, you owe yourself Â a trip to see Steve and Tina Thomas — two of the nicest people you would ever want to meet. Â You know Tina from this website – -she’s a fantastic pilot logging oodles of hours in her Bird Biplane, the Waco SRE, and a Beech 18! Â I am in awe of her talent! Â Anyway – we land and have a great time catching up with them since it had only been about 3 or 4 weeks since we were all at the LLT fly-in! Â We hopped into town for a quick bit of lunch and decided we should motor on to C37 to secure our favorite spot to camp.

So we climbed into the Waco and off we went for the short 20 min flight to Brodhead! Â It is always exciting to see the airport come into view. Â This is truly one of the best antique fly-ins out there! Another great airport with a long, lighted E/W grass runway and two crossing runways! Â The entire airport is hugely devoted to antique airplanes and you never know what treat you will find peeking in the hangars there!” 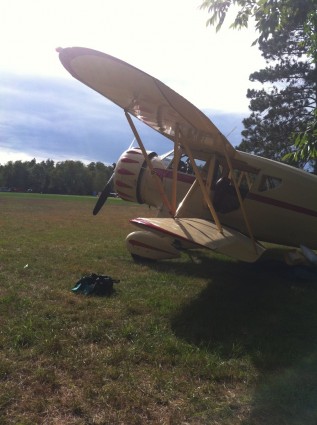 Parked at Brodhead and ready for the fun!

On a good weather weekend, you’ll see 300-400 airplanes on the field…and not your normal stuff either! Â And the best part, everyone flies from sun up to sun down! Â Then the bonfire and lie swapping starts! Â Great food and hot showers on the field. Â And the one last chance to see all our old flying buddies before the doldrums of winter sets in! 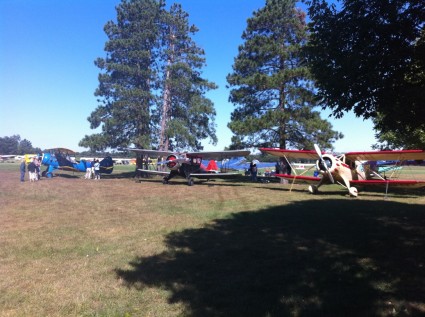 We pushed the Cabin into her old familiar spot next to the Lockheed, Beech 18, Cessna Airmaster, Stinson Detroiter and a gaggle of 195’s! Â We hadn’t been there very long before we saw the Waco 10 with an OX5 engine take to the skies hopping rides… “”Ahhhh… welcome to Brodhead!””
Stay tuned for the next installment … don’t want to make this too long… Judy will never get this loaded on the website!”