I loved airplanes and airports as a kid. Why it did not occur to me to become a pilot and pursue that as a career when I was young…I’ll never know.

Career wise, I became a paramedic which led to nursing school. As an RN, I have worked in the the emergency department and as a flight nurse (rotor wing). Flight nursing is what renewed my interest in aviation and sparked my interest to fly. The FBO owner that our company leased hangar space from invited the medical crews to come learn to fly at a reduced rate, so myself and one other nurse took him up on the offer. I obtained by private pilot rating in 2012. This same FBO is where I met my wonderful husband who hangared his (now ours) Decathlon. : ) Â He has had quite an interesting career in his own right. He has killed coca fields in Colombia, flown for the Red Baron aerobatic team, aerial fire fighting and crop dusting. 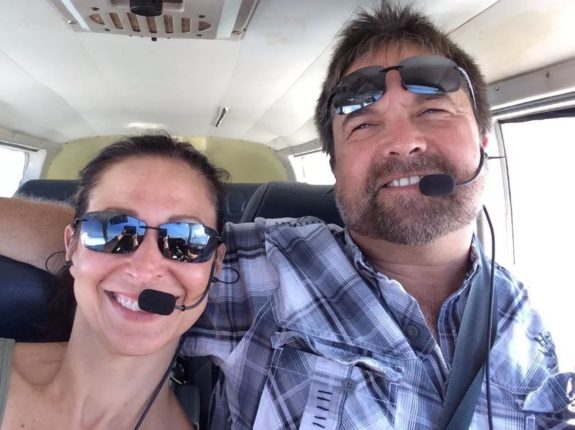 Together we own a twin Comanche and a 1940 Stearman. My next goal is to obtain my instrument and multi engine ratings.

Taildragging Goal: To become proficient in our Stearman

Thoughts on Taildragging: They require your full attention. The old adage that you are not done flying until the plane is chalked is especially true of a taildragger. They do not allow you to become lazy and because of this, you become a better pilot. Everyone should learn to fly a taildragger first. My husband had to undo some poor habits I had when he first started teaching me.