Talk about how a chance meeting can change a person’s life, here’s a story about how an entire family’s lives were changed. At the heart is Susan Theodorelos & Andy Heins’ passion for flying and their wish to share it with everyone. Susan sent us this great story about her new friends Sophia, Kathie and Mike Lucas. 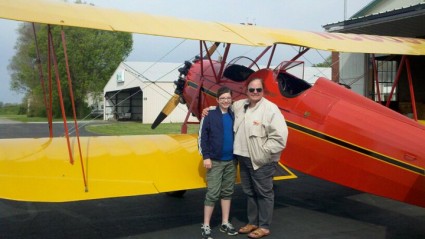 Andy was giving Â rides at Moraine one Saturday — and noticed one girl in the sea of boys. He knows that young boys will go just because their buddies are going – -but a young girl shows up – -she’s really interested. So Andy singles her out to go with him in the Citabria. 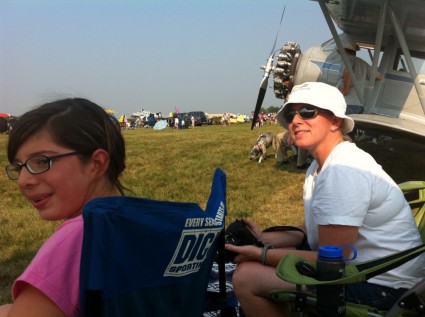 Kathie and Sophia at the Taildragger Fly-in down at Waynesville. Sep 2011

He shows her how all the controls work and she’s a natural! When they land he began talking to her parents and her science teacher who gave her the information about the Young Eagle rides. I had just landed and Andy motioned for me to taxi over and stop. He introduced me to Sophia and we piled her in the front seat of the RNF. As we were taxiing out, I asked Sophia if she wanted to be a pilot and she said “Oh yes!” And I said, “That’s great — we need more women flying because they are really good at it!” I hear this soft but determined voice reply, “Women are a lot better at a lot of things!” I told her she was my new BFF! 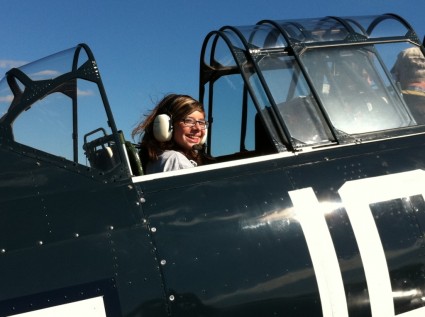 For Sophia's 12th Birthday (which fell on the Saturday of the Waco Museum fly-in) we bought her an instruction ride in the T-6. The pilot and his wife were a little skeptical at first - but she climbed right up on that big bird and sat down in the back rarin' to go! When they returned, the pilot said -- "She's a natural! I usually ask them to put the plane in a turn and then start explaining the instruments and most people fall out of the turn -- no her! She just kept doing what she was supposed to!" Her log book reads like the who's who of aviation... Student Prince time logged, T-6 time logged, Citabria logged... Yay Sophia! Sep 2011

We had a great ride in the RNF and we told her parents, Kathie and Mike to come down the airport any time and we would take them flying. They are now part of “The Gang” and we love having them as part of our Moraine Family! 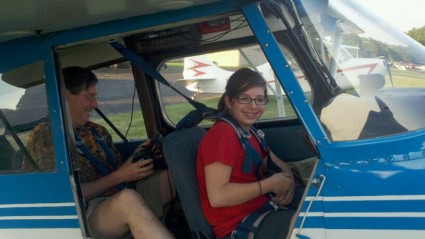 Sophia's first official lesson at 11 years old with Tim Pond in the Citabria -- not bad! Jun 2011 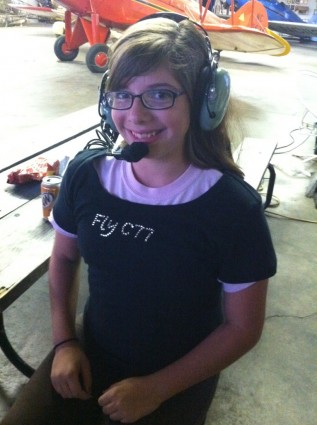 Sophia sporting her new "Fly C77" shirt we got her from our trip through Poplar Grove and a set of Dave Clark's that Anne Wright sent to her! She's all set!

I remember Kathie in the beginning was very hesitant about flying at all. She would get motion sick often. So Andy would take her up in the Citabria for nice easy flights and explain how things in the airplane worked. It was the turns that seemed to make her most nervous — so he said — lean into the turns like a motorcycle…. and from that day forward the motion sickness became less of an issue. Kathie really likes flying int he RNF — fresh air helps a lot! Andy kept taking Kathie up and eventually she started flying the airplane and was doing really well! One evening when Terri Hull flew her plane down for the weekend, she took Kathie up and gave her her first official student pilot flight! 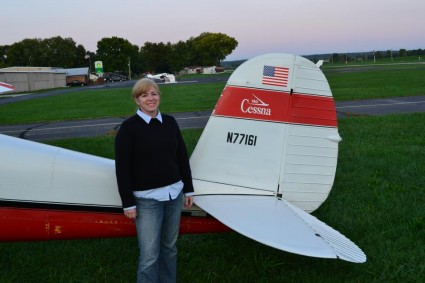 Kathie now has logged time and really enjoys the planes. She asks all the important questions about why and how and will be a great pilot! 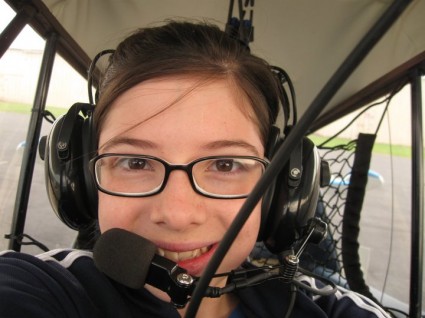 This photo is in the Citabria and Sophia's getting ready to go flyin! First official lesson! Jun 2011

Sophia’s dad, Mike, has started taildragger lessons at Red Stewart Airport ….. now they are all taking lessons with logged time… the Flying Lucas’! 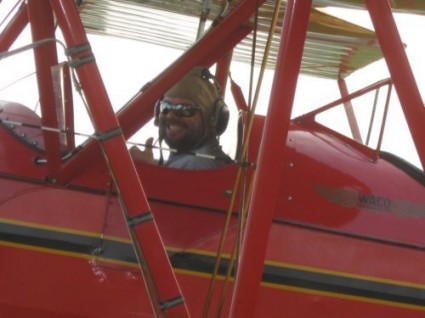