The Women with Silver Wings 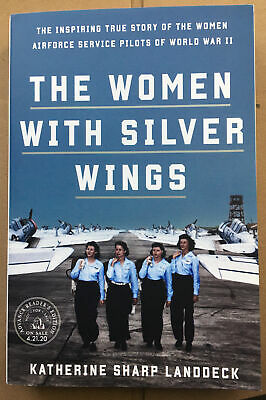 Dec 2021 The Women with Silver Wings

Thank you to Andy Gelston from PorterfieldPlane.ning.com  for surprising me with this excellent contribution to our LadiesLoveTaildraggers’ Aviation Book Reviews.
Andy writes:“…it was decided the WASP would be disbanded on December 20,1944.  The WASP were still ferrying aircraft on this date, and found themselves no longer eligible to ride in military aircraft to get back to their bases, though some CO’s who appreciated their contributions to the war effort bent the rules and arranged transportation, others found themselves escorted off the field and left stranded at the gate to figure out for themselves how to get home, often with just a few dollars in their pockets…and this was just the beginning of the official shunning.”

When the author was at the ‘93 Bartlesville Biplane Fly-in, the owner of a Pitts urged her to go visit Curtis Pitts, who was sitting in the shade of a hangar.  Caro Bayley, a WASP, was by his side.  Despite her BA in American History, Landdeck soon learned that her entire education had been egregiously deficient: she’d never heard of Women Airforce Service Pilots. She spent the next quarter century trying to rectify that, resulting in this book, which gives a pretty good accounting of the WASP backstory, history, and post-WWII activities.

Many think they know the WASP story, but they don’t.  Landdeck weaves the stories of about a dozen WASP, most are girl-next-door types, but there are also the more celebrated, like Jackie Cochran, Nancy Love, and Cornelia Fort. The thirty eight WASP who lost their lives in the service of the WASP are also remembered.  The story is told in chronological order, for the most part, which makes it easy to follow, and reads like a novel, reminiscent of Janet Dailey’s Silver Wings, Santiago Blue, but this is all true, corroborated, and footnoted with sources.

Landdecker is a historian, and a pilot with an irrepressible passion for aviation, but she doesn’t delve heavily into the nuts and bolts of flying.  She mentions types the WASP flew, sometimes revealing their quirks, but there’s very little technical data.  This story is about the politics, personalities, motivations, values, and aspirations of the WASP and those who supported or resisted them.  We learn the press loved them at first, but turned harshly on them when male primary flight instructors, no longer needed for the CPTP in late ‘43/early ‘44, feared that they would lose their deferment status and have to fight in combat. So they did what any red-blooded American coward would do, they blamed their woes on those who were different: the WASP. Love, the elegant aristocrat, wanted the WASP to become part of the Air Transport Command and fought hard behind the scenes in Washington to make it so; Cochran, a rough-hewn traditionalist from very humble beginnings that she wouldn’t admit to, thought all WASP just should go home, get married and have kids, so she publicly undermined Love’s efforts.

Perhaps because of all the bad press, it was decided the WASP would be disbanded on December 20,1944.  The WASP were still ferrying aircraft on this date, and found themselves no longer eligible to ride in military aircraft to get back to their bases, though some CO’s who appreciated their contributions to the war effort bent the rules and arranged transportation, others found themselves escorted off the field and left stranded at the gate to figure out for themselves how to get home, often with just a few dollars in their pockets…and this was just the beginning of the official shunning.

The WASP were considered neither military nor civil servants when it came to any kind of benefits. There was no GI Bill for them, no VHA, just Cochran’s Victorian sentiments forced upon them.  After decades of effort, lobbying Congress and organizing the surviving WASP, they were finally recognized in 1977, only to soon learn that some good old boy Senator had mucked up the verbiage in the bill, leaving a loophole for the VA to refuse them benefits, which it gleefully did.

In 2009, Congress decided to patronize the surviving WASP by giving them gold medals and a party in the Capitol rotunda. Many couldn’t make it to DC, like P-51 ferry pilot Louise Bowden Brown, and were issued their medals by their home state Congressional reps. When presented with her medal, at 93, Louise replied, “A lot of good this does me now! Why didn’t Congress support us back in ‘44? Do those politicians think just because were old women, we’ll gush over a bauble and a party, and finally feel appreciated?  They sure haven’t learned much in fifty-five years, and neither have our children and our grandchildren.  They don’t and probably never will know about the WASP because we flew too well, were too professional, and made men realize just how stupid their patriarchy was and still is.”  Landdecker’s tome will hopefully prove her wrong.  In 2015, the WASP were no longer permitted to be interned at Arlington: there was no longer enough space for them, so the surviving WASP and their children had to fight yet another battle to get that decision reversed…it may not be their last.

There has never been a movie made about the WASP, that I’m aware of. Perhaps it’s because the WASP had way too much integrity for the Hollywood crowd, who seem incapable of shooting a historical piece with integrity; only films with blood, guts, mayhem, and sex (like Pearl Harbor in 2001: Alec Baldwin as Doolittle—was that meant to be a bad joke?). It would be nice if the crew that recently made Midway could give these old gals the same respectful treatment.There’s a lot of material in this book for the screenwriters to be inspired.

This Book Review by Andy Gelston