Very interesting comments about how tie-downs held up at Sun ‘n Fun; from the Pietenpol List.

Most tie downs failed where the plane was in the direct path of the tornado.
We had a mixture of dog screws, aluminum plates with angled anchors, and the
angle iron ones with 4 steel anchors at different angles. All pulled out.
Across the field, we did see a few broken ropes on planes that were on
concrete and had perm tie down anchors, but the planes flipped anyway. We
saw a lot of the Claws that failed, they simply bent toward the ends and
pulled straight out. 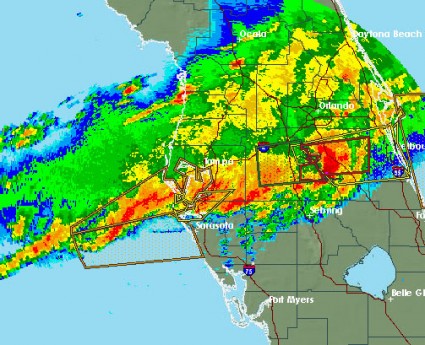 In a meeting with Rod Hightower (EAA Pres) last night, he told us about the
action in the Warbird area where he rode out the storm. 4 T-6’s were tied
down all in a row. The one on the left shot across the pad and ended in a
ditch with prop, wing and tail damage. The second one (Rod’s) did not move
or was damaged in any way. The 3rd went about 150 yards and ended in a
smaller ditch. The 4th left and hit 6 or 7 other planes including P51s.
Aaron Tippen’s Helio Courier, which was to the far left, flipped over Rod’s
T-6 and landed upside down where the 3rd and 4th T-6s were parked just
seconds before. Rod said that about 80 witnessed the DC3 “fly” over the
Mustangs and land on the other side unhurt. The Cessna Caravan flipped
twice. 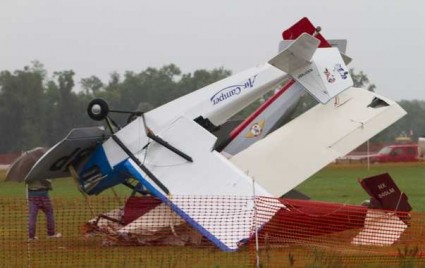 We learned a lot from the storm and have a meeting May 5th in Oshkosh to
discuss and plan. We need to anchor down the Porta Potties as they caused
great damage flying across the grounds (many with (blue) people in them
trying to get out of the rain and hail). No more of the umbrellas that stick
down through a table as they caused a lot of damage to property, luckily no
one was impaled. We are going to look at tied downs. Better anchors on the
vendors tents. The milk jugs full of water hanging on a rope did not help
much.

Frank Metcalfe (Big Piet on top of the pile) said there is a YouTube video
about testing many types of tie downs using an engine hoist for the pulling.
I have not seen it yet, but in the Florida sandy soil, the dog screw anchor
does fairly well if the top does not break off at the crimp.

Phil Smith talked to someone that said he saw the Piets destroyed. He said
that one of them lifted up well above the others and started spinning
around. Milliseconds later the other two came up at the same time and they
all went together spinning around then dropped to the ground in theÂ famous
PietnPile. I wonder about this report as the rain was so heavy that
visibility was only about 10 feet.