I got to zip over to Hagerstown, Indiana in the S7 late this afternoon for the yearly gathering of antique & vintage aircraft. Yep, I know it’s strange having a flyin on a Tuesday, but this is the 4th year they met on the Tuesday before Oshkosh for a gathering loved by the locals and held at the small town, grass strip. Led by Andrew King, the pilot from the movie â€œFly Boys,â€ vintage & antique aircraft descended on Hagerstown in preparation for the big fly-in to Oshkosh. â€œThe Hagerstown Airport is great,â€ says King, â€œWe loved it the past three years. Itâ€™s not often we get to see such a large airport thatâ€™s also a grassy airport. Old planes like grass because thatâ€™s what they were built for.â€ 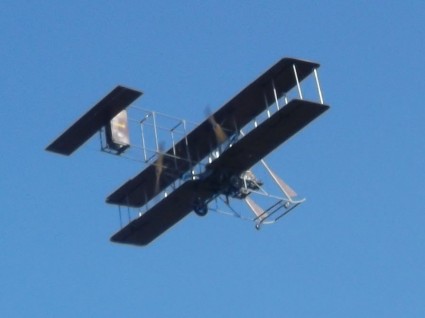 I have to say, I got a little concerned when it departed downwind to please the crowd that was gathered on the north end of the strip. Hagerstown has about 4,000 lovely feet of grass so a downwind departure in about 8 kts normally wouldn’t be a big deal in most aircraft but this reproduction with an O-360 Lycoming still struggled to get up and around (not over) the trees! It came back around for a slow speed flyby and then headed back to Dayton before sunset. 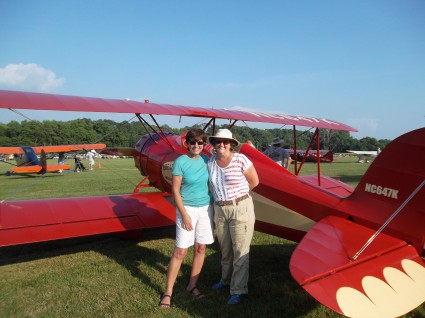 So, I’m hanging out, minding my own business at Hagerstown and surprise, up comes this happy lady asking me, “Is your name Judy?!” Holy cow, turns out to be lady taildragger pilot, Juliet Lindrooth, from Pennsylvania who flew in solo for today and the rest of the trek to Oshkosh. Now it was getting very interesting! Juliet owns and flies a very special antique airplane, aÂ 1932 Brunner Winkle Bird BK.

Sadly, she wasn’t able to bring it on this trip but I was happy to see her in her Grumman Tiger. But not toÂ despair, she WILL be flying a taildragger for the next 2 weeks courtesy of a friend – and it’s a Champ so she’ll have a wonderful time! 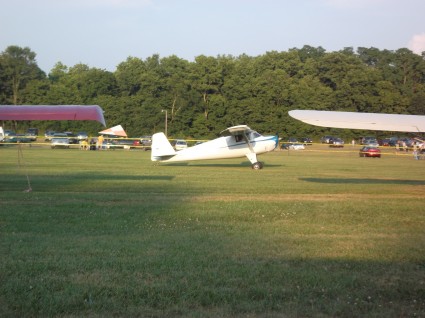 OK, new and old tailwheel pilots beware, I learned tonight you can mow down some nice looking Indiana corn if you’re not prepared. This Luscombe made his approach and landing a little too close to the corn on the east side of the strip and somehow ended up doing a quick ground loop through the corn. No damage though – just a lot of corn stalks hanging from the tail feathers and down the runway. 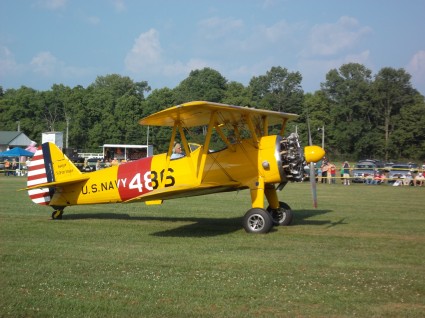 Juliet and I sure enjoyed finding ourselves at a grass strip in middle of Indiana tonight, surrounded by corn and bean fields! 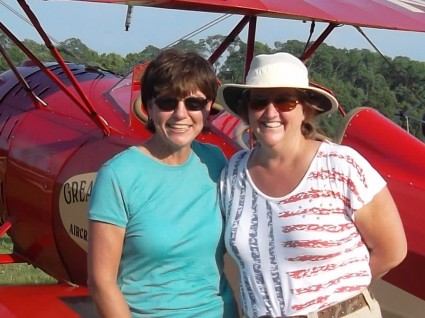 It was kind of a fluke that I even flew over there tonight but so happy I did. Sure was great meeting you, Juliet, and look forward to catching up with you at OSH! Don’t forget ladies, we’re meeting for lunch on Tuesday, July 26 at the Hilton Terrace Restaurant past the north 40 at 11:30 for lunch – join us lady pilots – tailwheel or nosewheel!

It’s also lady taildraggers day in Vintage on Wednesday, July 27, Â so be there to support your taildragger pilots at 11:00!!