Boyd and I continue our flight around America, 28 days into our dream flight. The people of California have been very good to us, fantastic in fact, but the June Gloom marine layer has been a persistent thorn in our side for days. Today, finally, our RV7 took us on the ultimate California pilot’s adventure.

We were overnight at Modesto, CA, KMOD, hoping with everything we had for a reasonably good day to fly the northern San Francisco Bay VFR route. Watsonville was clear by 10 a.m. and Half Moon Bay, just to the north, and our lunch destination, was 1200′ overcast.

Shortly after, we launched over the rugged hills between Modesto to Watsonville, guardedly hoping for the best.

My oh-so-awesome, very hazy shot of the Golden Gate Bridge. What a RUSH! And it’s not even Golden!

We flew high over the mountains, and as we topped the final peaks near the coast, we dove past Watsonville.Â  We had to be under 1200′ MSL when we reached the water. Turning N.W., 1200′ worked for a while, soon after we had to drop lower. As we neared Half Moon Bay airport, a shallow descent was required to keep us out of the scud, but visibility underneath was a good 20 miles. 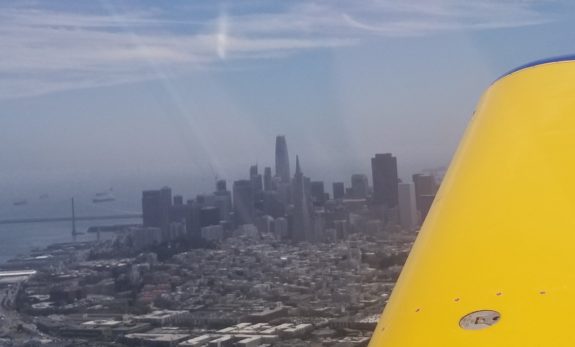 It’s very hard to focus when the Golden Gate Bridge is on your left and the magnificent view of downtown San Fran is on your right. 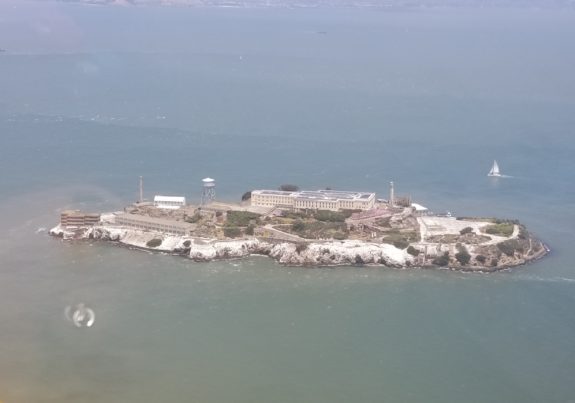 The coast between Watsonville and Half Moon Bay

How’s this for a close up of San Francisco?!

KHAF, Half Moon Bay Airport. Somebody pat me on the back for making a squeaker landing on 30!

Hey, I made a great landing so I’m gonna smile!Â  Happy to be at Half Moon Bay Airport and even happier to finally fly the famed Bay tour!