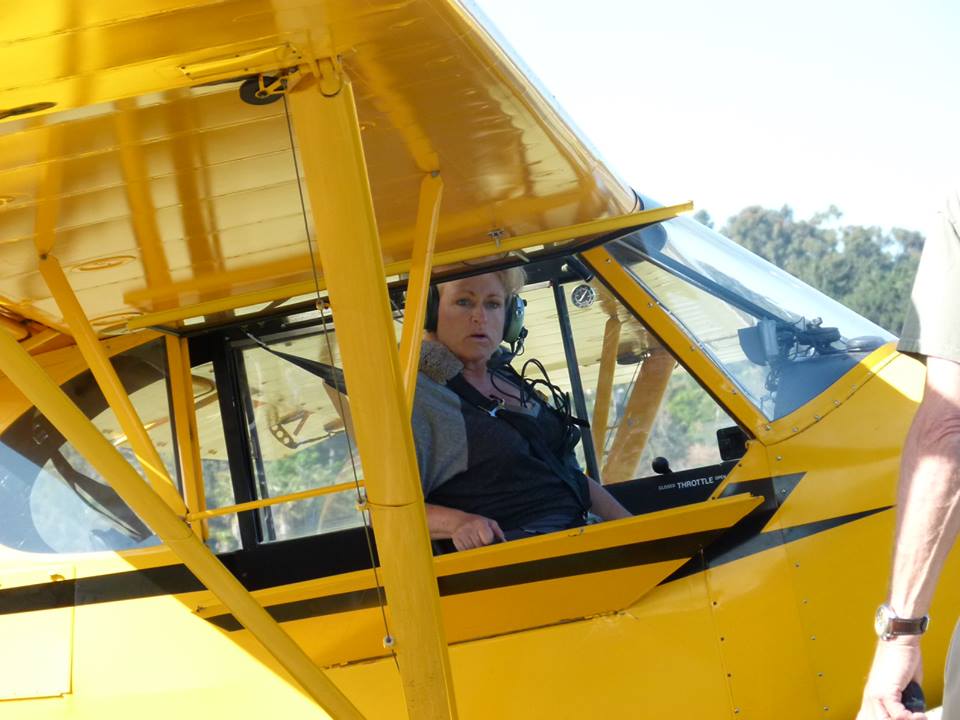 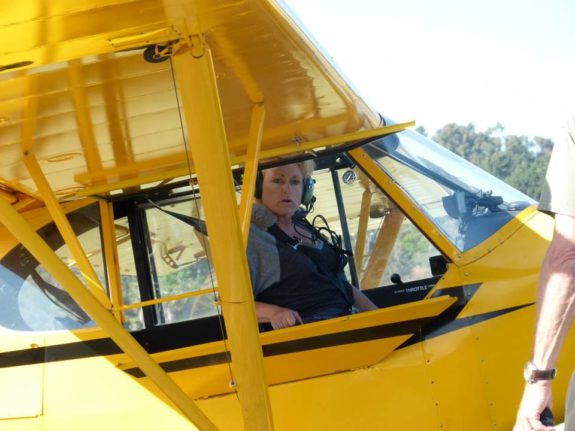 The only unusual weather San Diego has, that makes any difference to pilots, is low clouds and fog with its lousy visibility. This is what I had, which ate up three days before I could depart for Texas. My flight plan was fly east as the crow flies, get to east Texas and go north. Â First night I got as far as Deming, New Mexico, second Sweetwater, Texas, and Mineola, Texas on the third. When I reached Texas, I swear I heard the winds say, â€œWell would you look at that, I believe I see a little yellow bird. Letâ€™s see what sheâ€™s made of and blow her around a bit. Hell, letâ€™s chase her with a bitty thunderstorm too.â€ O.K., so seeing red on my radar, a rare event for me, I practiced my panic & put my butt down in Mineola and stayed there. 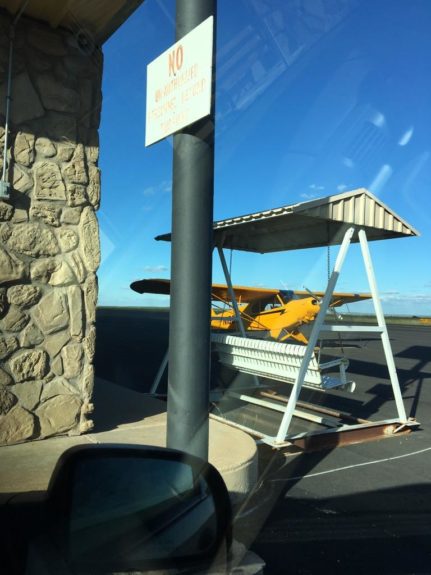 Tuesday brought all the Lady birds in from Cypress River Texas. Â We had already bonded on line, but seeing the women matched with their airplanes made it complete. Â We spent the morning with the brilliant Lupita Wisener and hubby, owners of the airfield, learning local aviation and Mineola history. This was followed by a tour of Heidi and David Hokeâ€™s haunted home, the Hogg Mansion and the teachings of all things paranormal. Â

We enjoyed a homemade quiche and sweet berry strudel there before we dashed off to the airport, bound for Stephenville. There we had a tour of the haunted historical museum and a grizzly tale of murder.

Lunch at the Hard Eight BBQ where the brisket just melted in our mouths was a gastronomical treat. Â We moaned while securing the seatbelts around our swollen bellies, but well worth it. Off to Big Spring and the famous historical Hotel Settles.

The hotel was elegant to a fault, replete with a gorgeous portrait of original ownerâ€™s mother, size six of course! Â A tour of Hanger 25 gave us an overview of the Big Spring Military base over the past 50 years before it closed. It is now home to several prisons and industry including oil pipelines. 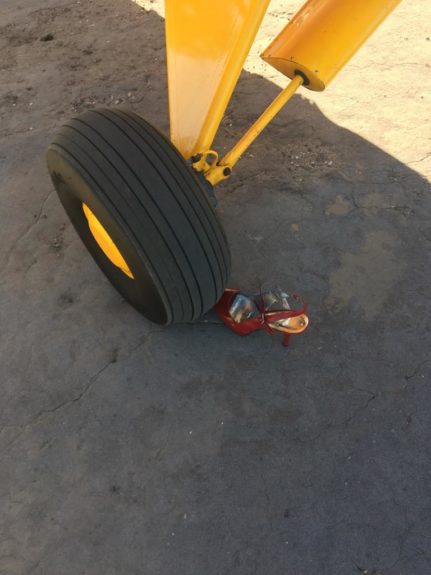 Next, a quick trip to Sweetwater Tx, Avenger Field, home of the WASPâ€™s, Women Airforce Service Pilots, at least that was the plan. Â As I turned on my Cubby, I heard the unsettling sound of clanging metal. My newly installed EGT /CHT was not registering in my second cylinder. Shutting down I signaled to our commander in chief, Judy, and her hubby Boydâ€¦I had troubles. Off went their engine, immediately, and they came to my plane to diagnose that, indeed, the 2nd cylinder exhaust pipe had departed from the engine. 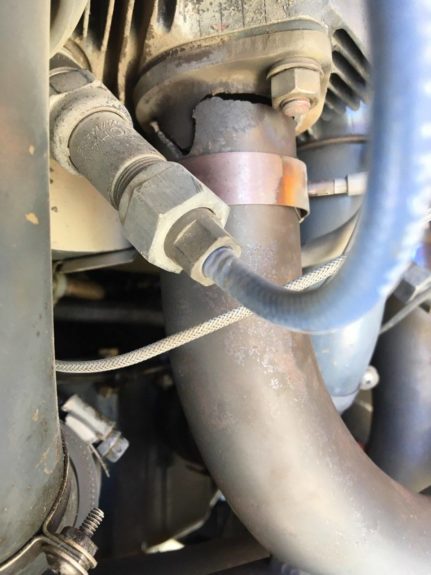 Fortunately for me, I found the problem on the ground, not in the middle of Texas. Lone Star Aviation, with qualified A&Ps, Jack, the owner, and Rodney, who knew how to work on Cubs, were just feet away from my now disabled Cub. Jack immediately started to work on it, calling all the arc welders and finding places that might carry a new exhaust pipe in stock. Â Those two were working like I was their only important client even though their hangar was filled with sick airplanes. I contacted my dear friend Bob Turner, my mentor and â€œKnower of all things Cub in San Diego,â€ to ask for his advice. He got me the part number for the exhaust pipe which I passed on to Jack and who ordered next day delivery. Â

Happily, the ownersâ€™ daughter, Kendra, had a car rental business and within an hour I was down the road heading for Sweetwater, the WASP hangar, a fantastic catered dinner and luscious cocktails with the company of my winged friends. Ms. Carol, the museum docent, gave us an intimate history of the women fliers and their trials working towards being a newly minted WASP. The evening was completed when our own Lynn gave a talk on survival that got everybody talking. Â

Meanwhile, back in Big Spring, the exhaust pipe came in, and dang it, it didnâ€™t fit. The alternator was in the way. As in all things Cub, the exhaust pipe had been modified. So, I called the master Cubber, Bob Turner, and discussed my new problem, to which he said, â€œJust take the alternator off, fly it without a radio, and of course youâ€™ll have to hand prop it.â€ Â I must have been silent too long. I was thinking, Iâ€™ve got a bum shoulder so hand propping will destroy the surgery I had to fix it. No radio and I didnâ€™t follow roads. I navigate as the crow flies, so if I go down in the middle of Texas Iâ€™m a buzzardâ€™s dinner. Next thing I hear is â€œIâ€™ll come get you, be there Mondayâ€. Really?! Wow! I could either think of this as the walk of shame for not being able to get myself back by my own volition, or feel like Iâ€™m the luckiest person on earth to have this kind of safety net. But most of all, lucky to have this kind of friend.

Friday morning as the gang flew off in ferocious winds to Cisco, home of the famous Airmail route markers, (I had to wonder what those pilots would think of our GPS), the final flight of the tour, Ranger Field. 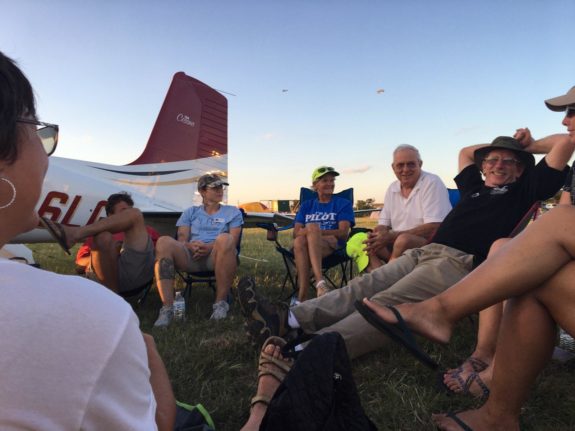 Ranger field, a true field of dreams; with Stearmans and Aeroncas making lazy patterns and beating paths into the grass. Homemade grilled burgers, and cold beer, hanging out with old friends that only a week ago were new. The evening ending with the telling of our own ghost stories under a wing.

With Saturday came more delicious burgers, an airshow under cumulus skies, and the end of our time together. All the lady birds flew away, leaving Lynn, myself and Lisa alone to ponder and reminisce on a most amazing trip that only one woman, Judy Birchler and her side kick and professional cat herder, Julie, could only have put together. Judy was once described by one of the pilots as having the stamina of two twenty-year olds. Iâ€™m convinced she must be possessed, too, to have put together this Haunted Tour!

So, Monday came & I was back in Big Spring getting the Cub ready for the trip home to San Diego, when the most wicked thunder storm in the history of me blew in. There was massive flooding, blinding rain and lighting. Never thinking, in a million years, my friends from California would ever be coming through this deluge today, I blinked at the runway and there, coming through the downpour, was the little blue and white Super Cub with Bob Turner and Mark Benson coming to take me home. Â As fast as the gap in the storm opened, it slammed just as fast as Rodney and Jack got her secured in a nice dry hangar.

Tuesday morning, after the weather had passed, cub hand-propped, Bob in the back seat coaching me on the fine art of no radio flying, we blasted off for Pecos, and Fabens. We needed to make a phone call in Fabens to get a class Bravo clearance through El Pasoâ€™s airspace. Â Bob requested to stay on the border of Mexico and the U.S., following the river. Bless their hearts, they gave it to us. What a difference a river makes! Not sure if America is great? Go take a flight at 1000 ft AGL on the US side of the border, look across to the other side, youâ€™ll know how beautiful America is!

Ended the day in Deming, with a beater car to the hotel, thank you Bert of Desert Aviation. Â Next day Deming to Gila Bend, chasing trains, Bobâ€™s favorite thing next to planes, the whole way. Â By the way, all the navigation is IFR, â€œI follow roadsâ€ (Hwy 20 in TX, Hwy 8 in CA), or Railroads. Safe & smart. Â Itâ€™s what you do when you donâ€™t have a radio to call out on to save your butt. Actually, itâ€™s a really good idea normally going across country, especially if you donâ€™t care to have a really, really long walk into town. 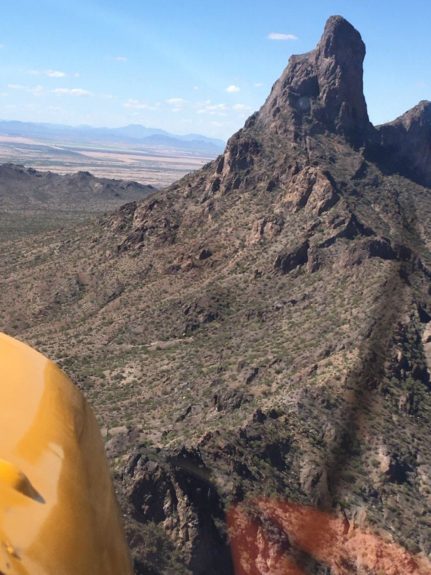 Continued to have lots of Texas aerobic wind flying even though we were now in New Mexico and Arizonaâ€™s Gila Bend. Â Stayed at the Space Age Lodge, and yes, it had a Flying Saucer on the roof. Iâ€™ve got to say; those aliens made a pretty good margarita!

Thursday and we are homeward bound, looking forward to little or no wind, but, unfortunately, California didnâ€™t get the message. Took off, very nice, smooth, but an hour down the road, here come the aerobics. Last stop in Imperial county A/P to get Class Delta clearance into Montgomery Field, San Diego. Â Last leg following Hwy 8 into the mountains at 4500 ft. which I had never done. Iâ€™m normally stratospheric hoping to avoid the static down below. The view was so totally different and real. The cars and the mountains looked normal sized not toy sized, and the turbulence at this point was just normal. The view was nothing less then spectacular as we came in through the last pass, turned on our radio for the first time and heard the live voices of Montgomery field â€œCleared to land 28 Right.

Funny thing was, my Cubbie flew just fine without a radio!