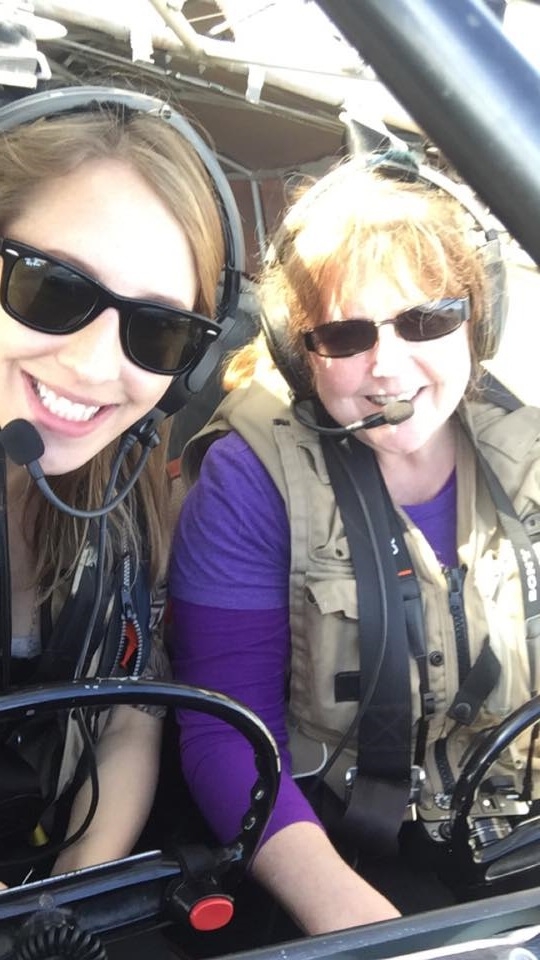 Please proceed with caution. The story you are about to read, paired with 20 striking photos, will surely send you Googling “Alaska skiplane flying”. Thank you to LadiesLoveTaildraggers’ member Vanessa Jump Nelson forÂ submitting a sensational story!

Vanessa is based at Starkâ€™s Twin Oaks (7S3) in Hillsboro, Oregon. 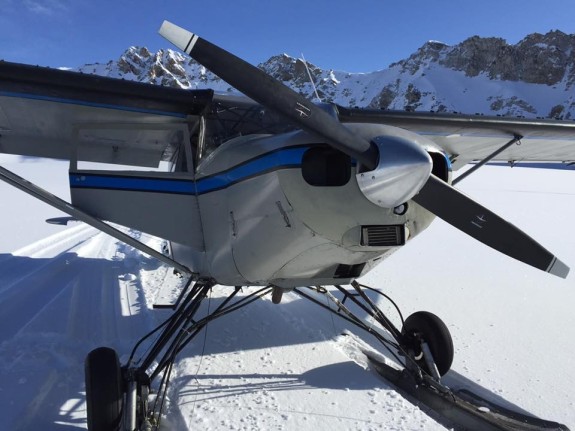 I was the lucky recipient of the very first Northwest Section Scholarship (2015) from the Ninety-nines International Organization of Women Pilots. This scholarship is intended to support women pilots in continued pursuit of advanced aeronautical skills, both professionally and recreationally, either by adding a new rating or participating in a defined training activity, e.g. seaplane, tailwheel, mountain flying, or aerobatics. I applied to use it for a skiplane course and was awarded the scholarship with a year to use it wherever I wanted. I did quite a bit of research into skiplane courses in various parts of the United States, settling on Alaska Floats & Skis in Talkeetna, where I did my skiplane training in mid-May 2016. 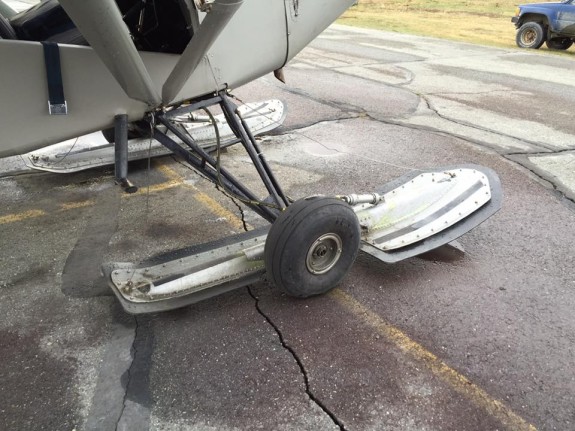 I grew up around small planes and I own a set of skis for my Cub, but wheelskis are a landing gear I’d never seen before. It’s an interesting engineering creation that we rarely see in the lower 48, but when I was in Talkeetna, it seemed that most of the aircraft I came near were outfitted with these amazing little “feet.” The ones we used were operated by a hydraulic system activated by a pump handle mounted to the floor under the left seat. The wheel lifts up and goes above the ski, so it’s kind of like a retractable landing gear. It really reinforced to me how important that GUMPS checklist is! We took off from pavement, landed on snow, then came back to land on pavement, so that gear was going up and down each flight. 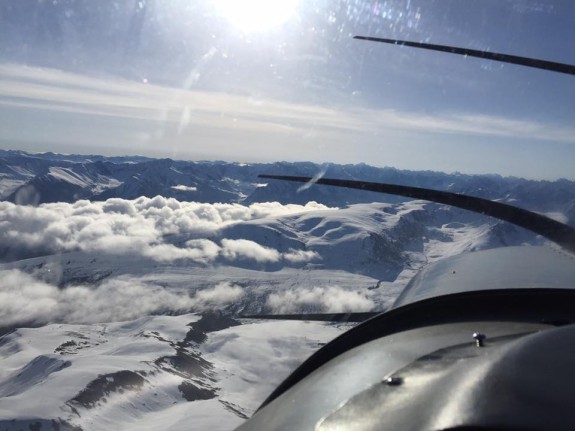 Because the spring breakup was earlier this year the lower elevation lakes were unusable for ski landing, so I got more than the usual amount of time in the Talkeetna Mountains for my training. The days were getting warmer and the sun was out so even on the glacier, the snow would start to melt as the day warmed up. At night it would freeze again, necessitating flight lessons early in the morning while the snow was still cold enough from the previous night’s low temperatures. 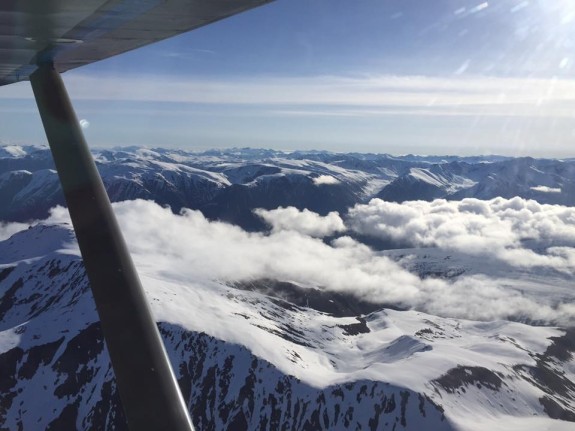 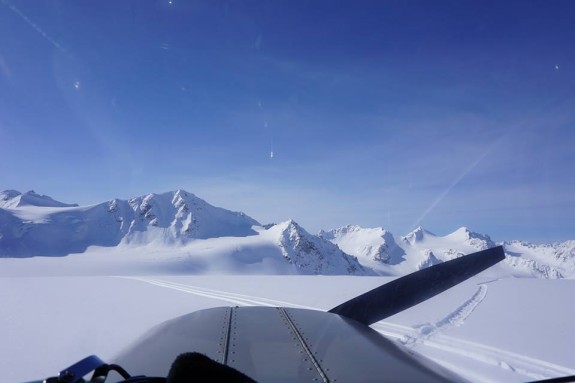 The first morning was spent with several hours of ground school, learning about the proper techniques of flying in the mountains, different types of skis and how they work, techniques of landing on snow, emergency procedures, and a lot of survival information. Then we broke for lunch and I went into town for breakfast at the Talkeetna Roadhouse, where they serve reindeer sausage and HUGE pancakes, with a different flavor pancake each day of the week. (Rhubarb pancakes! Yum!).Â  In the afternoon, it was too warm to fly on skis, so CFI Don took me out in a Pacer on tundra tires to get the feel of the airplane, and some landing practice at Talkeetna Airport (PATK). In Oregon, I own and fly a Cub with a Continental engine and wingspan of a little over 35 feet, but Pacers have a Lycoming engine and a wingspan of slightly over 29 feet. The Pacer fuselage is a few feet shorter than the Cub, and then these Alaskan Pacers have a bigger tires. A taildragger is a taildragger, though, so I guess I did all right. Early the next morning, in a Pacer outfitted with wheelskis, Don took me through the procedures of how to land on snow, specifically, a glacier. 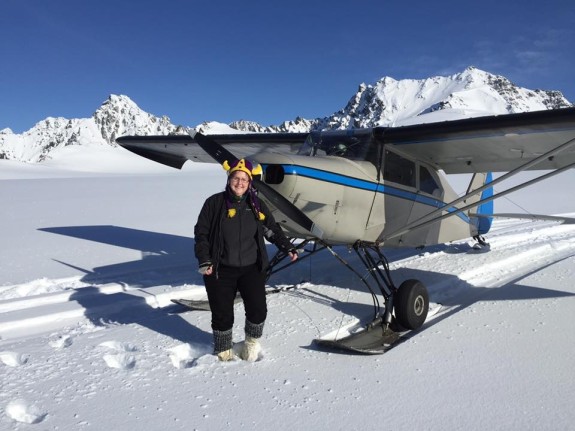 I did it!Â  Whee! I landed on the 7200′ level of the Swiftsure Glacier in the Talkeetna Mountain range of Alaska.Â  What a thrill! 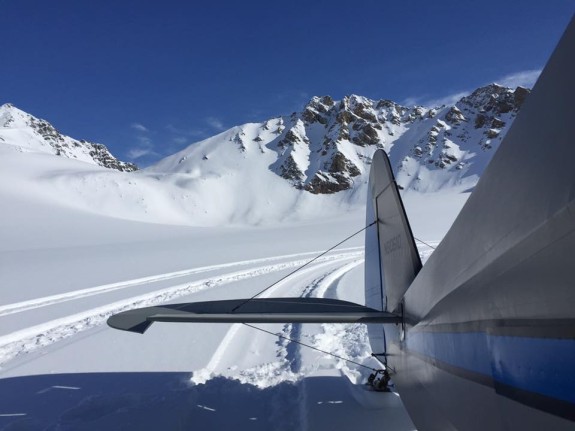 Even the tailwheel has its own ski. The friction of the skis on the surface melts the snow a bit underneath, causing skis to freeze to the surface when they cool.Â  Getting started for take-off is fun, as you are rocking all the controls: rudders, elevator, ailerons, in order to break free and begin forward motion. It’s amazing how long you have to keep the stick forward to pick up momentum going downhill on snow. 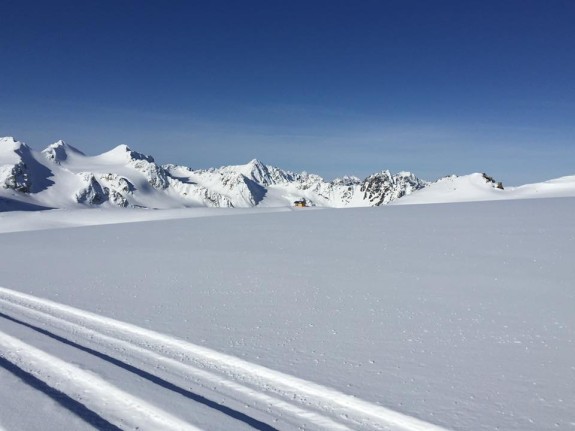 We got out of the plane and snowshoed to the little shelter you see in the distance.Â  It’s actually a cabin that Don built in March 2016 by flying in all the materials.Â  There was a documentary crew there the whole time while it was being built, and the show is set to air in the fall of 2016 as part of “Building Off the Grid: Alaska” on the DIY Network. 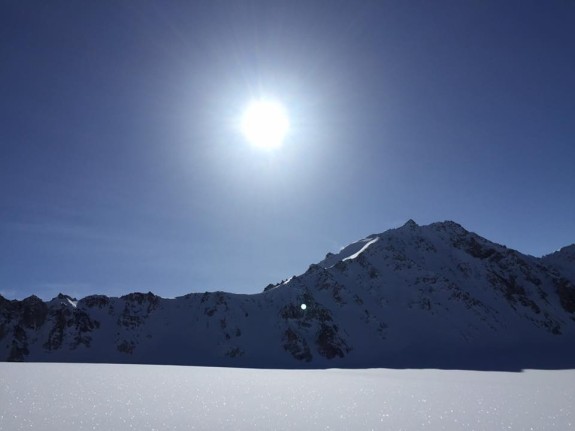 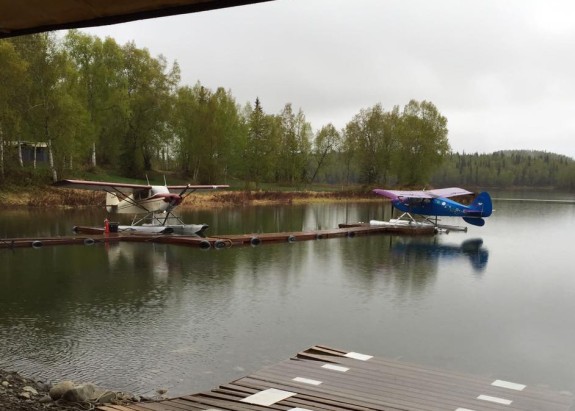 I was there for the skiplane course, and I loved every minute of it, but I kept ogling the floatplanes.Â  The lake was beautiful, and the sounds of airplanes were everywhere. At the lake, it was the sounds of floatplanes taking off and landing often.Â  At the airport, which was 5 minutes away, there were at least half a dozen FBO’s with the soul purpose of giving tourist flights around Denali or dropping off and picking up climbers, so the air activity was constant.Â  Most of those taking off from the Talkeetna Airport had wheelskis, in order to take off on the pavement and land in the snow.Â 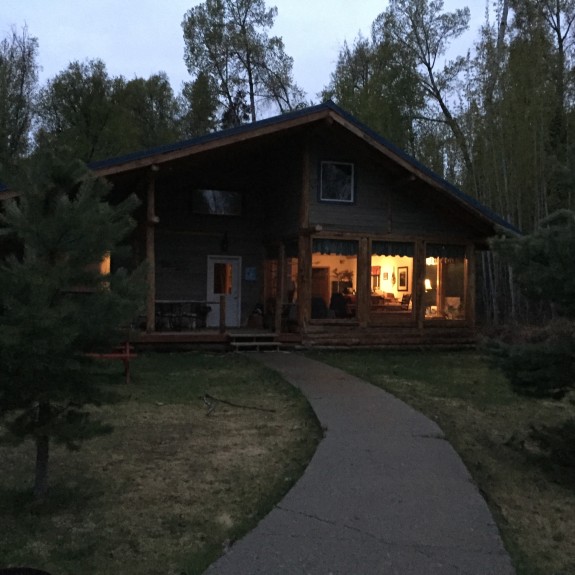 Alaska Floats & Skis has its own student housing. They own several tiny cabins suitable for individuals or couples, along with a beautiful large log cabin with 4 bedrooms, 3 full bathrooms, full kitchen, TV and wi-fi.Â  Several other AF & S students from North Carolina were staying in the lodge, too. They were working on their floatplane ratings with staff CFI’s Grant Gibbons and Brooke Roman, so we shared a few meals in the communal kitchen and had late evening chats about what we’d all learned or discovered about flying in Alaska before turning in for the night. There was great comeraderie around the evening firepit almost every night with students, staff, neighbors, three dogs, and a pot bellied pig named Captain Nemo. The young men from North Carolina completed their float ratings toward the end of the week, and we all celebrated their success together! 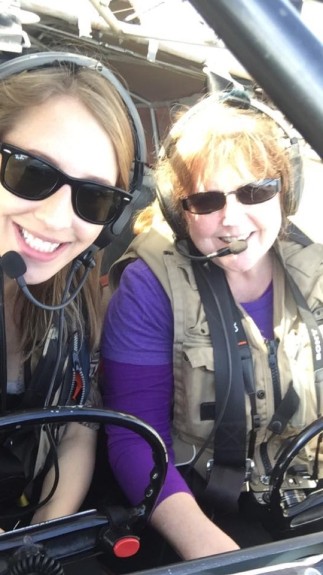 Brooke Roman, floatplane CFI, is also a member of Ladies Love Taildraggers.Â  She, too, is a scholarship recipient!Â  She was at Oshkosh a few years ago and was manning a booth across from the Seaplane Pilots Association booth.Â On a whim, she put her name in for a scholarship and WON! She could go anywhere she wanted to get her rating, but chose Don Lee’s flight school at Alaska Floats & Skis.Â  Don asked her to come back as an instructor and I am so glad she did!Â  I plan to go back the last week in June 2017 to get my floatplane rating and I hope some LLT’s will join me! 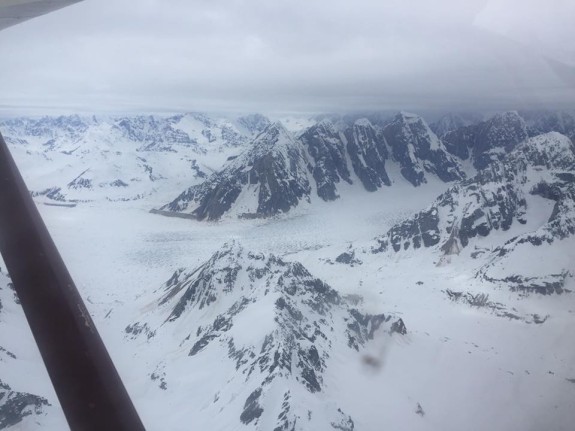 Brooke and I flew into the Denali National Forest area. We crossed into the amphitheatre area just as the snow began to come down. It was exciting hearing all the other pilots on the common traffic frequency for the Denali Mountain area. There was a Beaver above us with climbers they’d just picked up and somebody landing below us on the glacier. There were others giving PIREPS about what was shaping up to be a white out condition to the north. A very, very busy radio frequency and airspace indeed! 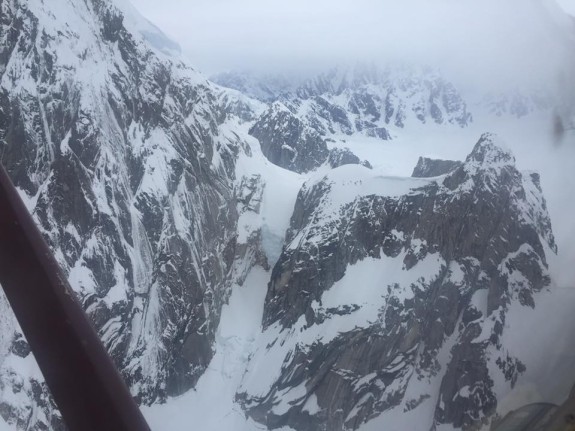 We didn’t get all the way to the top. This was the point at which we decided to turn and head south as snow was falling to the north of us. 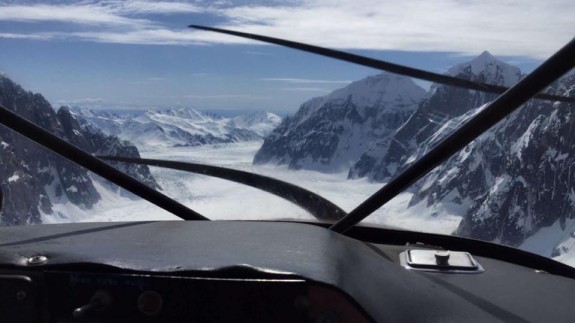 We followed Ruth Glacier out of Denali. LOTS of airplanes above and below us, all staying in conversation about their locations. This is where it really hit home the phrase they say all the time in Alaska: “Fly an hour, or walk a week.”Â  I think it would take me a month or more to get from here to civilization but then maybe others walk faster than I do.Â 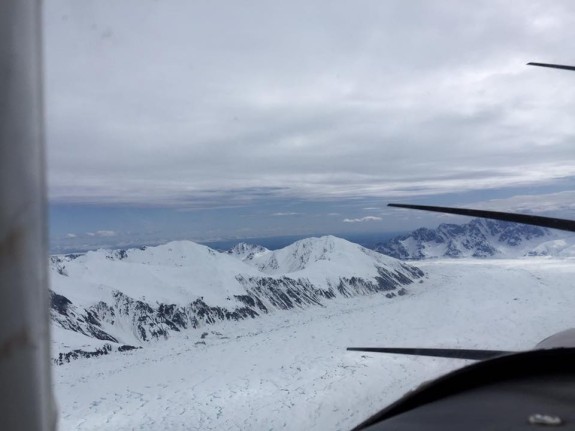 Still following Ruth Glacier, it was like a freeway. We kept our eyes out for bears. I kept seeing flocks of cranes. 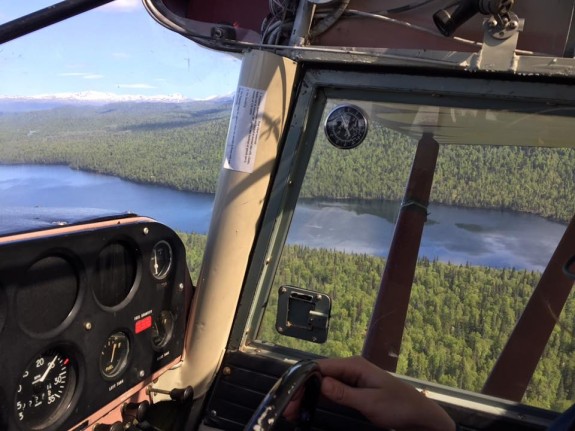 Larson Lake is quite long so we did some “splash & goes”! I was impressed by how a little crosswind can quickly turn a floatplane in the water when you cut the power. 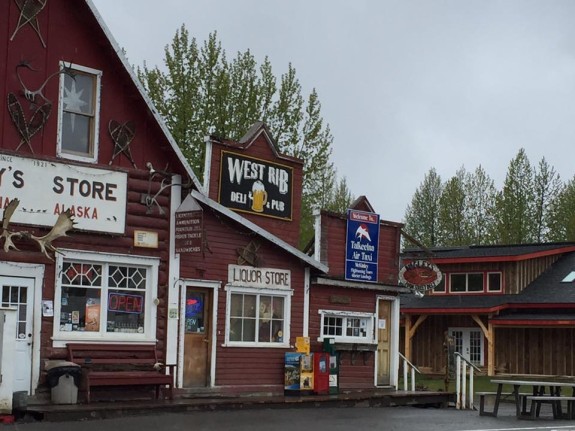 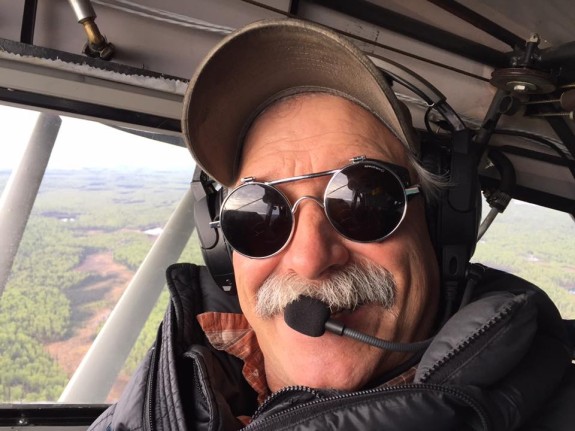 Alaska Floats & Skis Owner and my awesome CFI for the majority of the week, Don Lee. He makes flying fun while learning. One of the times we went into town to eat with a group, there was a large framed photo of Don on the wall of the restaurant, signed by the famous Susan Butcher, the first woman to win the Iditerod Trail Sled Dog Race four out of five years in a row. The photo shows a very young and seemingly invincible Don back in 1975, in the front seat of a Supercub. In the back seat was Susan Butcher, and behind her in the baggage compartment were a bunch of fuzzy noses. As we ate our meal, Don explained that there were 9 sled dogs crammed in the back, and he took off with two of Susan’s sleds, one hanging from each wing. 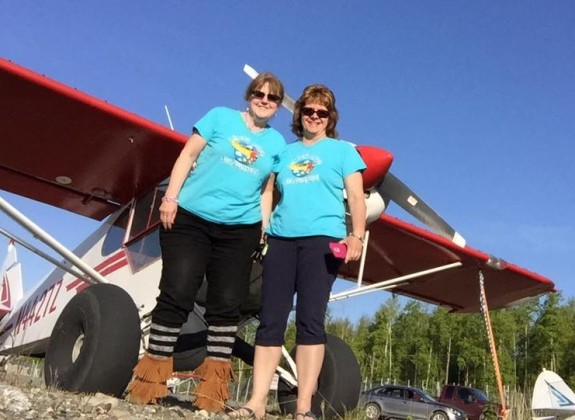 On my drive back to Anchorage to catch my flight home, I stopped in Wasilla specifically to meet Lisa Preuit, another LLT’er. She flies for Above Alaska and is the winner of the 2016 LLT Stick & Rudder Master Class Scholarship, which will be completed later this year in Sisters Oregon (6K5), with Brian Lansburgh. We arranged to meet at Wasilla Airport (PAWS) and snapped a couple selfies together in our LLT shirts, then went off to have breakfast in town. Thank you, Judy, for bringing this network of female tailwheel pilots together! Thank you to the Ninety-nine’s for the Northwest Section Scholarship to fly skiplanes in Alaska. It was a whole lot of fun!