What made you want to learn to fly? 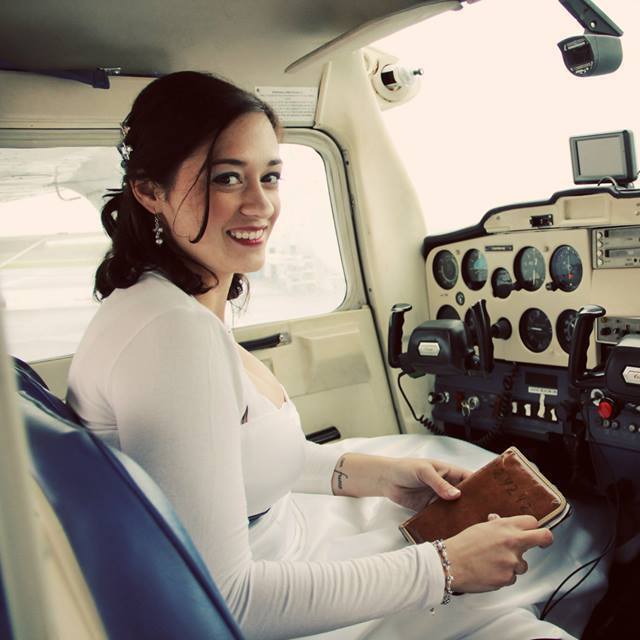 What made you want to learn to fly? That was the first question we asked Elizabeth Heizler, and each of the ladies who applied for our “Ladies Tailwheel Endorsement Scholarship”. We are sharing Elizabeth’s response to that question and think you’ll agree from her answer, she is a winner. Elizabeth won 1st place, one of two ladies who will receive tailwheel training from Brian Lansburgh in Bend, Oregon.

Describing the ‘what brought me to want to learn to fly’ is a difficult question to answer succinctly. It was a series of life events that started with my first flight as a passenger in a small plane. You know that feeling you had as a kid waiting for Santa on Christmas Eve? The flight felt like that, only broader, deeper, and more meaningful. That’s why I wanted to get my pilots license, because of the sheer undiluted joy for the adventure of every. single. flight.

I’ll start by explaining that I’m adopted and I had been searching for my birth parents my entire adult life. That first flight with my birth father was also the first day I ever met him. 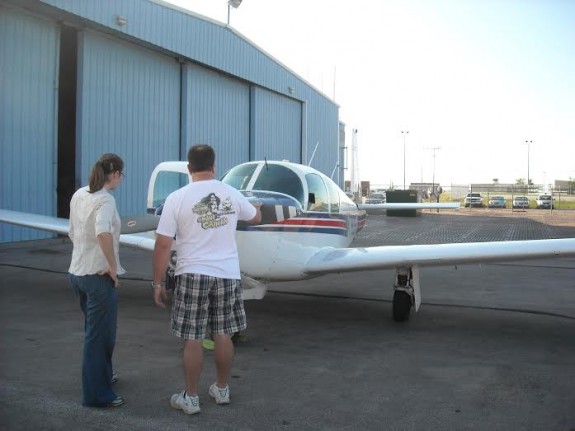 My biological father and I explaining the preflight before he took me flying that first time.

During the flight he let me fly his plane and from that second I was hooked. It felt like freedom, and adventure, and everything that’s too wonderful for words was wrapped into one moment. I wish I could say that moment lasted longer that in did, or that I was an ace from the beginning, but truth be told, it was a complete disaster. After about fifteen seconds of glory I heard a squealing noise that grew louder and more insistent. Then the plane seemed to slow to a stop and I was certain we were going to crash into the black hills. My birth father chuckled at the expression on my face (which was likely a mix between a terrified “I’m-going-to-die” look and a guilty “It wasn’t me” look) as he gently took back the controls. After he recovered from my near stall he explained what I had done. After we landed I stepped out of the plane with a grin from ear to ear and a skip in my step. Despite my failure I had fallen in love with aviation. My birth father must have recognized it even before I did that I, as he puts it, “got the bug” and I had it pretty bad. The sky had gotten in my blood and I knew I needed to find a way to do it again and learn to do it right. 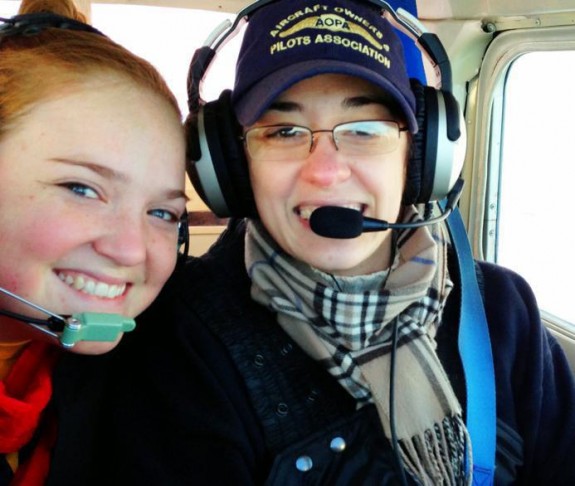 Me and my friend Stephanie. She was my very first passenger I ever took!

It was almost two years later when I took my first flight lesson. After that wonderful first flight I went home and told my now ex-husband about the experience and how badly I wanted to take flight lessons. I was shocked by his staunch opposition to my desire to become a pilot. I had found something that I was truly passionate about and was told I was forbidden to fly and it broke my heart. It was about a year later that we divorced and I was left with nothing. I believe that this single act of telling me I couldn’t be a pilot was the beginning of the end of the marriage. It caused me to face the abuse I had endured at his hand for nearly 10 years and the control over me I had allowed. But now I had this ever-present draw to learn to fly and it gave me the courage to leave the abusive relationship and the possibilities that aviation put before me were like those unopened Christmas presents. All I had to do was get my pilot’s license. I truly believe my overwhelming desire to learn to fly saved my life. 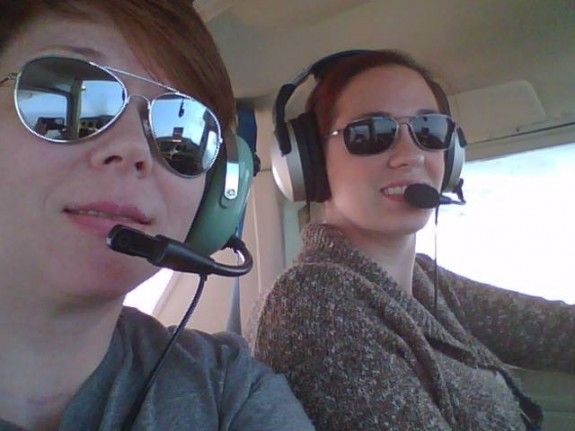 With my friend Jill

After the divorce I tried to piece my life back together and find my sense of self. I knew the first step I had to take was learning to fly. I had a tight budget and lived on ramen noodles while picking up extra shifts on the ambulance in order to afford what I felt was the key to getting back to the person I used to be. I found a flight school and signed up for an introductory flight. During that first lesson I was taught the basics and among these was how to do a coordinated turn. 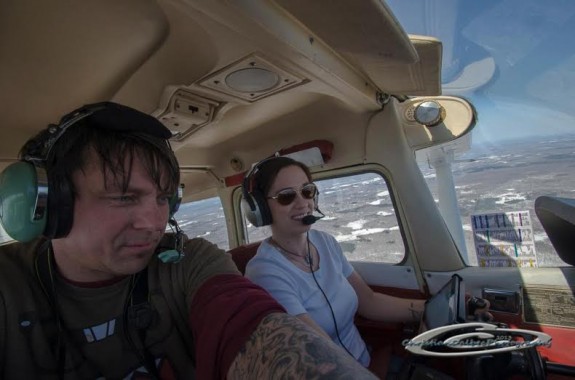 My friend Christian (who is an incredibly talented professional photographer). He comes with me even when I’m just doing touch & goes for an hour and a half. He likes the practice with aerial photography. And he’s goofy enough to get up at 3am for a sunrise flight. Haha!

Once I got the hang of it the CFI told me in the middle of my turn, â€œCongratulations, youâ€™re flying all by yourselfâ€. I thought he was lying. The ball was centered and the altimeter was reading a (mostly) consistent height. I looked over at him to confirm his words and he held up his hands to show me he wasn’t helping me with the controls. Then I looked out the window as the landscape slipped past us below the plane and it hit me, he was right! I wasn’t crashing or stalling. I was flying… I was doing it right! The impact that this moment had on me was profound and lasting. The burst of emotions I had when I found myself thinking, â€œIf I can do this, than I can do anythingâ€ was almost overwhelming. It was as though all those years of abuse that I was carrying around with me making me doubt my every decision were silenced for just long enough that I could hear my true voice. The one that says, “yes, you can”. That simple coordinated turn was when I discovered a confidence I had never seen in myself before. It’s funny how a such a basic maneuver that I do now with barely a second thought gave me the confidence I needed to start putting my life back together. It took another year to save enough money for the rest of my training but I had a goal and nothing could keep me from it. 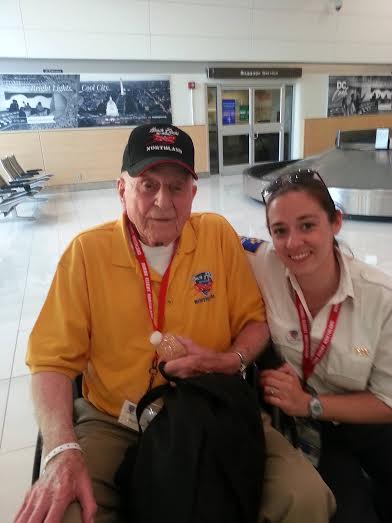 From the Northland Honor Flight to Washington DC. I was the paramedic on bus 3 and Paul was sitting right behind me. Turns out he was a pilot during WWII. The piloting advice and stories he told me about flying over so many different countries are things I’ll treasure forever. I have his phone number and am still waiting for a nice day to take him flying in the 172.

Needless to say itâ€™s a very personal story that led me to want to learn to fly. For me it invoked a strong sense of family. Not only does it connect me to my biological family but to my aviation family. Pilots seem to watch out for each other and I love knowing I can count on fellow pilots, and the members of my EAA chapter for anything. The desire to learn to fly also gave me a sense of freedom, independence, and determination. I knew that learning to fly would be a challenge but I also knew that if I could learn to fly an airplane it meant I really could do anything. 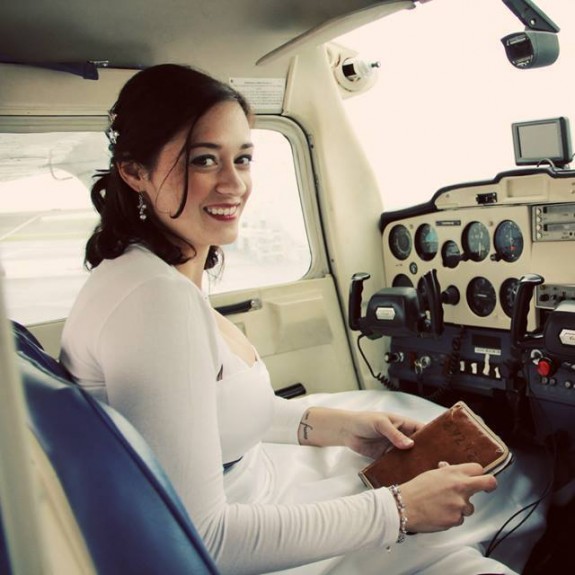 from my wedding on 6/1/13 at KSUW. My husband Don was just as happy as I was to get married at an airport. 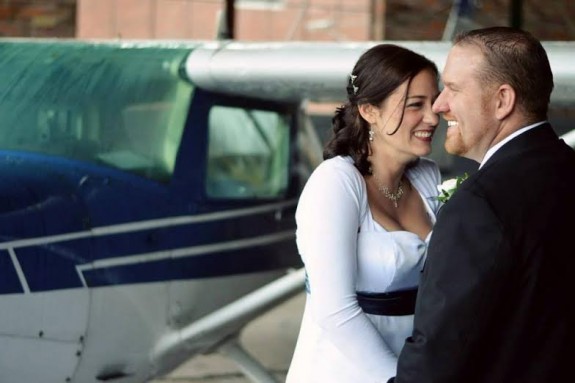 There was airplane decor everywhere and it was the perfect wedding for us!

A little over a year and a half ago I achieved what I set out to do, I earned my private pilot’s license. As a byproduct of my flight training I had re-learned to trust myself and my judgment which was instrumental in learning to trust others again. While I was still a student pilot I met and fell in love with a wonderful man who is the perfect match for me. He just happens to be a pilot too.

I married him on June 1st last year at the airport where I learned to fly. 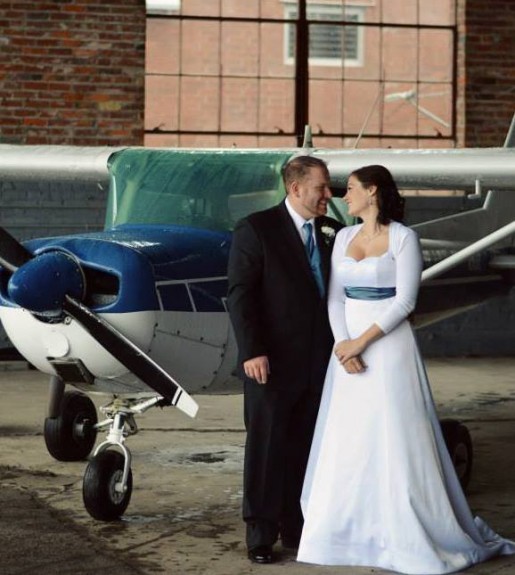