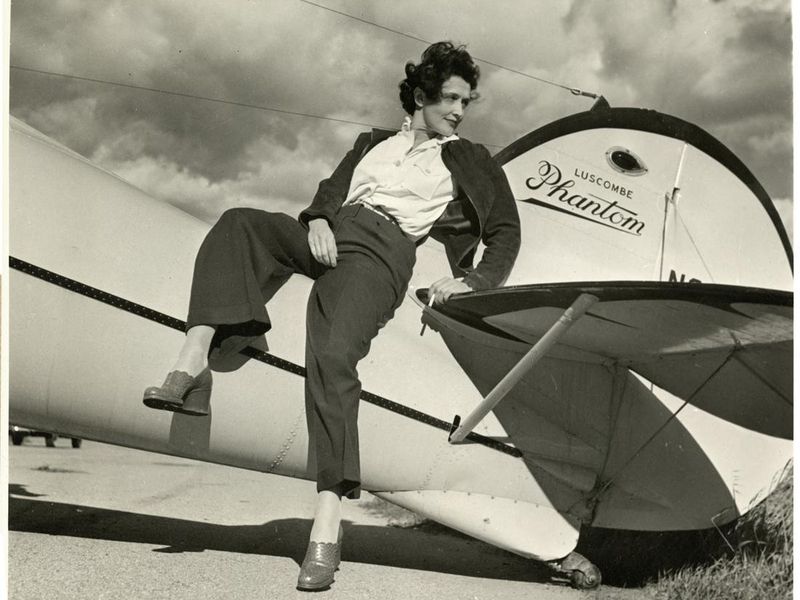 Take a look at the following photo and admit you’re intrigued, curious, even a little fascinated by what you see. I don’t believe I’ve seen such a fantastic, classic photo of a woman posed with an airplane that

I have a stash of photos of famous women with gorgeous airplanes and yet, a friend sends me this incredible image and I’m completely clueless. Who is she? Does she have a personal connection to the Luscombe ‘Phantom’ …. and what is a ‘Phantom’?! Could this woman posed so calmly, confidently and provocatively against the stabilizer be the pilot? I hoped! 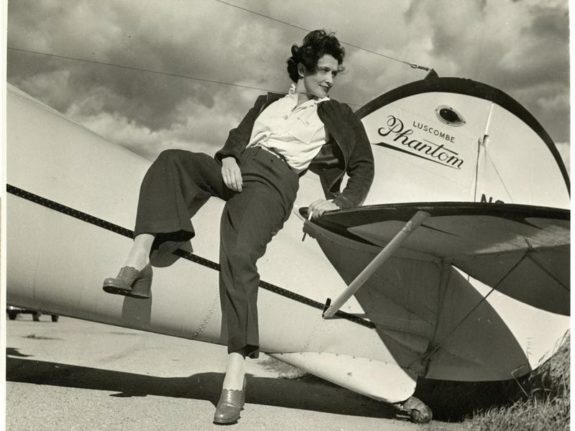 Aline Rhonie with her 1934 Luscombe Phantom

I quickly learned that although Aline was unknown to me, much is available about her and her life as a pilot and prolific artist. As an artist, most will say her greatest accomplishment is a 1,400 square foot muralÂ depicting aviationâ€™s early history. As a pilot her greatest accomplish may be flying her 90-horsepower Lambert MonoCoupe round tripÂ New York to Mexico City, the first woman to fly solo from New York to Mexico and back. Incredibly, within that record setting trip Aline was able to combine her two loves, flying and studying painting in Mexico with muralist Diego Rivera. 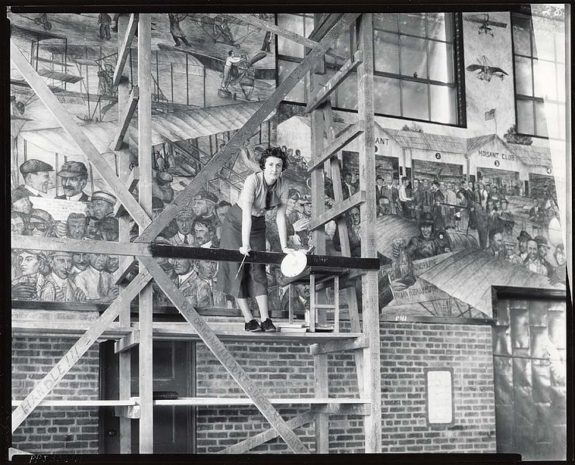 According to Air & Space Magazine, her mural project began in 1935 at Hangar F at Roosevelt Field in Long Island, New York.Â “Four years later, she finished her fresco mural titledÂ The Pre-Lindbergh Era of Flying on Long Island; included were more than 600 aviators and 268 types of aircraft covering the years 1909 through 1927. Hereâ€™s Glenn Curtiss, sitting in the cockpit of theÂ Albany Flyer, right before completing a 150-mile flight along the Hudson River from Albany, New York, to Manhattan. Heâ€™s flanked by Thomas Baldwin (the first person to fly over the Mississippi River) at the wheel ofÂ theÂ Red Devil, andÂ Alfred LeBlanc in his BlÃ©riotÂ (who won the 1910 Circuit de lâ€™Est, racing against seven other competitors and 47 carrier pigeons).”Â  Read more at https://www.airspacemag.com/airspacemag/artist-aline-rhonie-180956198/#rvzgSaQBdheHTrMj.99 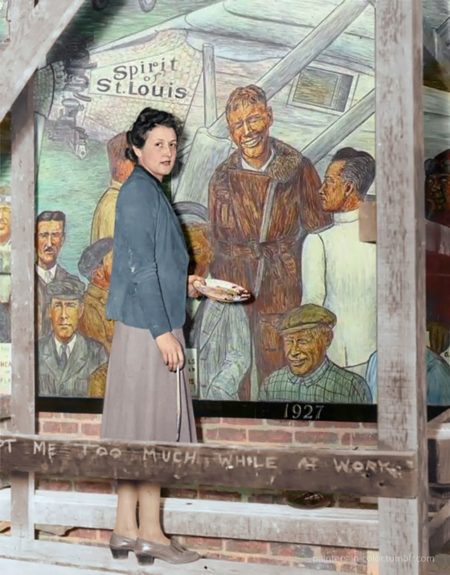 Rhonie learned to fly in 1930 in Reno, Nevada, and earned a transport license in 1931; her mural portfolio and log books are now in theÂ National Air and Space Museumâ€™s collections. Rhonie was an enthusiastic flier and her log book is filled with detailed notes and multiple exclamation points.Â â€œ1/18/31: 1st solo in my own ship!!â€ (A 300-hp Wasp Jr Stearman Model 41.)
Read more at https://www.airspacemag.com/airspacemag/artist-aline-rhonie-180956198/#rvzgSaQBdheHTrMj.99 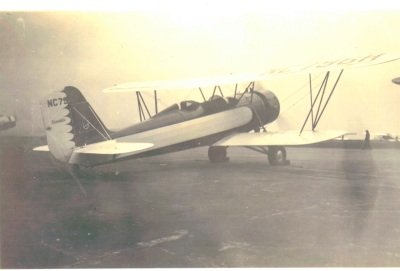 Per Jim Zazas “The photo of Aline Rhonie posed with the Luscombe Phantom was taken in mid-1941 after her marriage to Reginald L. ‘Pete’ Brooks ended. Brooks and Aline bought this first-production Luscombe Phantom 1, NC275Y, on January 12, 1936. This Phantom was built in Kansas City, Missouri in December 1934. In all likelihood, Aline provided most if not all of the money to purchase this Luscombe Phantom, yet many photos show Pete flying it, even though Aline was a very accomplished pilot herself. Walter Bowe of Sonoma, California owns this Phantom now, and he is restoring it to flying condition.” 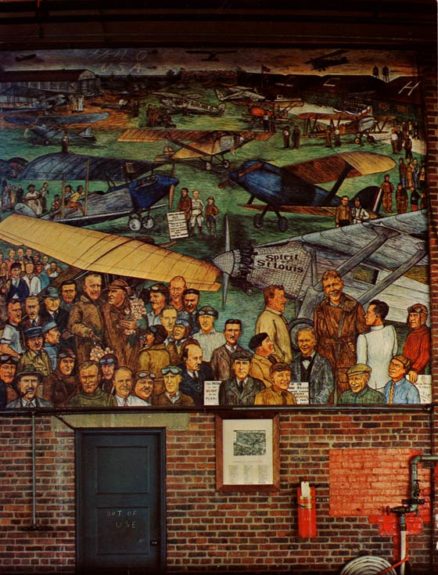 A post card showing a portion of the mural. 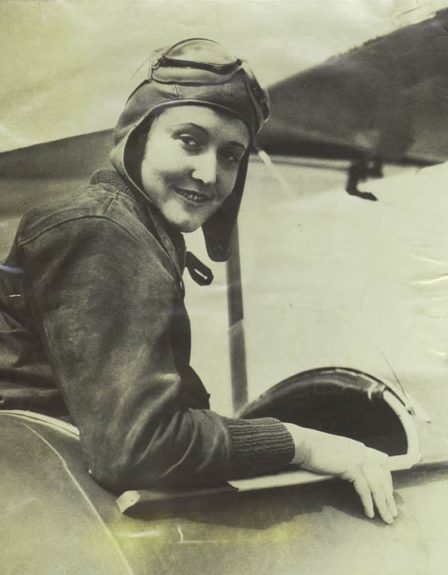 Carol Rex reports “From my research Aline owned three aircraft. The P & W Wasp Jr. powered Stearman, a Lambert Monocoupe of 90 hp and a Luscombe Phantom, 272Y. with a Warner Engine of 145 hp. The Phantom was a prototype and she flew it at the opening of the Bendix race, I believe. It is still in existence. She was a partner of aircraft designer Don Luscombe and was instrumental in him moving his factory to New Jersey.”Â https://simanaitissays.com/2014/12/06/aline-rhonie-golden-age-aviatrix-and-muralist/

More from Air & Space Smithsonian, “In 1960 (Aline Rhonie) learned that Hangar F at Roosevelt Field was scheduled to be razed and that her mural would be destroyed. Rhonie immediately obtained the rights to her mural from the building owners, and placed a frantic call to Italian conservator Leonetto Tintori, a fresco expert. He agreed to come to the United States and help her move the enormous artwork. A team applied heated glues and cloth to the walls of the hangar, and divided the mural into panels. The stiffened cloths were then pulled from the walls, removing the thinnest possible layer of paint, and the fragile panels were fixed to laminated masonite to preserve them. Rhonie spent months restoring the mural panels in a storefront window at the Roosevelt Field Mall, which occupied the old airfield space, and added an additional 25 portraits, extending the muralâ€™s length to 126 feet. She died in 1963 at age 53.Â (See additional photographs of Rhonie and a color postcard of her mural, here.)

I’m not the only person who feels strongly about Aline’s iconic photograph. Ray Johnson texted me the photo and later sent a note, “This photograph just grabbed me. As it turns out she was a phenomenal pilot as well as artist in her productive but yet short life.”

Our next LadiesLoveTaildraggers photo contest! 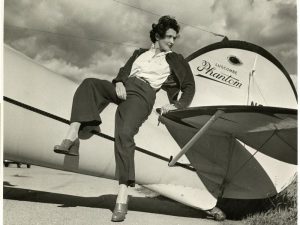 Ladies, I am in awe of this fabulous photo of Aline Rhonie. To honor Aline and her creative, artistic spirit, let’s all pose with a favorite taildragger, just as you see Aline posed in this photo. Email to LadyTaildraggers@gmail.com. I’ll repost as header shots and will send the best entry a free LadiesLoveTaildraggers tshirt!