Why not just land the damn airplane?! 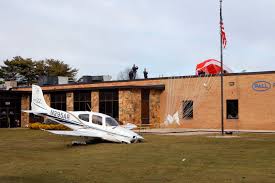 Am I the only person getting tired of this?! How many times have we seen video footage of a Cirrus aircraft deploying its emergency chute and incredibly saving the lives of the pilot and unlucky passengers? Maybe too many to count by now. Cirrus Aircraft reports on their website “There are 125Â people alive today because a Cirrus pilot pulled the chute in time to avert a tragedy.”

Here’s the latest video surveillance camera footage from Hauppauge, NY on March 5, 2016 of a Cirrus SR22 who suffered a complete engine failure and activated its CAPS (Cirrus Airframe Parachute System}. The aircraft was nine miles from its destination of Republic Airport, overflying Long Island, NY at 2000′ when it lost power.

AOPA reports “The technology and pilot training behind that â€œmiracleâ€ are major selling points for Cirrus, which offers standardized training for owners. Ballistic airframe parachute technology also has been made available to other aircraft manufacturers, and is becoming more widely available as either standard or optional equipment.”

OK. Did you watch the video? Did you see the speed the aircraft was descending? (20 mph decent rate). Wham! Did you see how close the aircraft came to landing on top of the flag pole?Â Ikes!Â Did you see how close it came to contacting the building? Neither scenario would have been pretty. I couldn’t be happier this pilot and his daughter are safe and suffered no serious injuries in the crash. But I am in no way convinced that pulling an emergency chute, especially in daylight, is the safest way to save yourself and your aircraft.

How dangerous is flying? Statistics say there are 16 fatal accidents per million hours of general aviation flying. The question is, are you, as a private pilot who suffers a complete engine failure, more likely to survive

If you are flying a Cirrus or an LSA with a full airplane chute, the answer very well may depend on the terrain and the conditions you are flying in. But the fact that you have an engine failure in an aircraft that does not have a full aircraft parachute does not in any way – shape – or form, mean you are going to die.

I personally believe the CAPS parachute system gives its pilots a free pass. Â It somehow relieves them of all responsibility and puts the burden of responsibility on a corporation – not themselves. I believe, if there’s ever a time to suck it in and step up to the plate, this is it. We are pilots. We are aware we are flying a machine and know that one thing machines do is break. We are prepared. We are watching, we are observing and hopefully, we are ready, if and when an engine failure happens.

Perhaps a version of a CAPS is in all our futures. Me? I’m not convinced a parachute saved all these lives and that my odds would not have been better without the parachute.