Oh, what a weekend! My Rans S7 had an invitation to tag along with a friend’s Rans S7 Saturday for a couples overnight to Lake Barkley State Park Airport in central Kentucky. A loose formation flight sounded like a lot of fun for the 205 nm trip and I was happy to plug 1M9 in the GPS and head south, Boyd riding tandem. 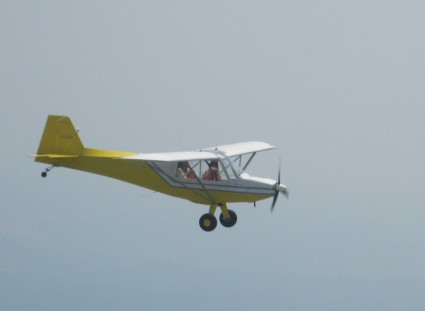 Wayne was flying their S7 with his wife Kathy (taildragger pilot) navigating from the back. It was 95 hot & muggy degrees on the ground so we all had our window air scoops blowing in our faces to try and escape some of the heat. 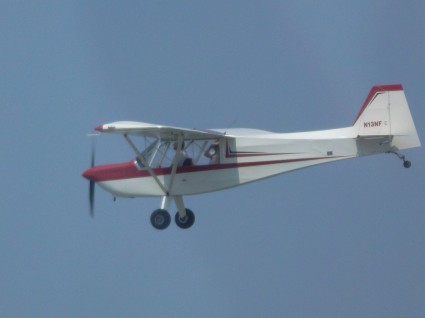 Here's Wayne leading the way. All's well at this point.

Now you’re probably thinking I’m going say it was a lovely weekend, we had a great time, great flights, yada yada yada, end of story, and all of that would be true. But, flying being what it is and the fact that “things happen” when you’re least expecting it, our trip took a little different direction. 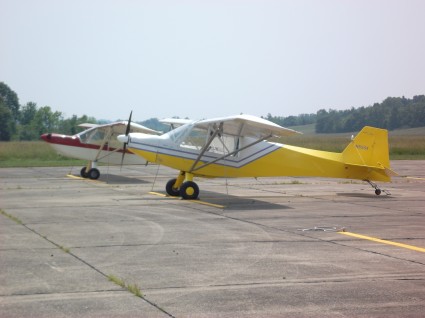 I don’t normally tell stories backwards but the real excitement happened at the end of the weekend on the flight home. Sunday’s departure was normal enough. Untie the pretty pair, preflight, throw the bags in, taxi to the end of the runway, do a run-up and depart on runway 20. Â I had powered up first so I led the way and Wayne was right behind me. We had decided before departing to fly back high to escape the heat, bumps and get the best winds so we climbed to 3,500′. Â Seems like Wayne & I said a couple minor comments on 123.45 once airborne but after leveling off Â Wayne transmits, “Our engine is shaking like a dog crapping Â razor blades!!”, followed by a quick, “Judy, where’s the nearest airport?” I heard later that the airplane was vibrating so much he couldn’t read what his own GPS said. 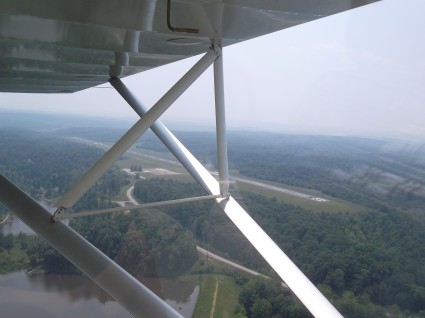 I was pretty sure it was where we just came from but hit “Nearest” on the GPS just to be sure. Barkley was the nearest and Wayne had already done a 180 and was headed back by the time I could transmit. He’s a very competent pilot and could have put it down anywhere. He pulled the throttle back and was able to nurse it back with the engine and prop doing some significant shaking. Once he had the airport made he switched the mags off, made a right downwind & base then slipped it – dead stick landing. 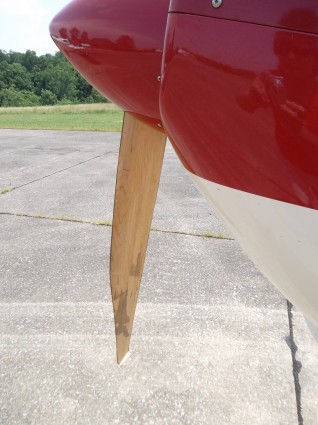 What you're looking at is a Prince wood prop with the carbon fiber covering gone on the back of one blade and wood exposed.

It turned out his Prince wood prop with carbon fiber covering had shed the coating on the back side of one blade – all the carbon fiber was gone and the wood was completely exposed. 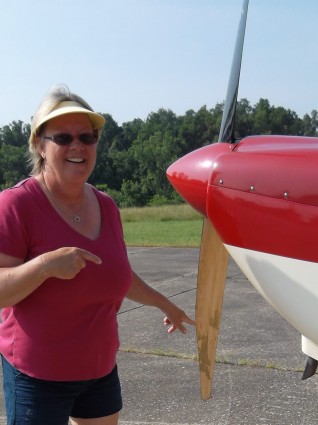 In the air the whole airplane was shaking and they were both trying to figure out what was causing it. Throttle cable broke? Piece of prop broke? It was an "OMG" moment to finally get it on the ground and see what happened.

Luckily this flight ended with the best possible outcome under the circumstances. Other than not being too happy about his 300 hour prop failing, Wayne’s no worse for the wear. Kathy would have rather had her feet planted on the ground (like the rest of us if there was an option) but she hung in there and was getting her 2 cents in about what she thought might be wrong. And ultimately she was right, it was the prop!

There are lots of lessons to be learned here and what you take away from it may not be the same as what struck me. But being there, watching, listening and observing I think….

1) A calm and level head can change the outcome

2) Altitude definitely is your friend

3) An airplane’s a machine and sooner or later, something’s going to happen. May be tomorrow or may be 30 years down the road.